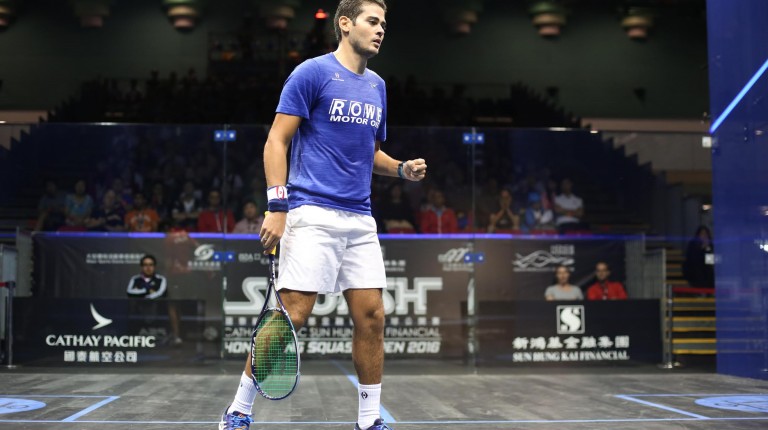 There are three squash championships currently taking place with Egyptians represented in the semifinals.

Karim Abdel Gawad has made it to the 2017 UCS Swedish Squash Open semifinals after securing his victory over Australian Cameron Pilley in the quarterfinals. Abdel Gawad snatched a hard-won victory after winning 3-2 (11-7/9-11/11-9/12-14/11-6). Abdel Gawad is ranked second internationally, and has been seeded first in the competition.

Tarek Momen was another Pharaoh competing in the UCS quarterfinals against France’s Gregory Gaultier, ranked third internationally, and seeded second in this tournament. The match started with the Egyptian player winning the first two games by 11-3 and 11-7. Gaultier did not permit another Pharaoh showing in the semifinals, as the French champion won the following three games by 11-5, 13-11, and 11-2.

After England’s Daryl Selby and France’s Mathieu Castagnet withdrew due to injury, the first semifinal match is taking place between Abdel Gawad and Scottish Alan Clyne. Gaultier is matched up with Germany’s Simon Rösner in the other semifinal. Both semifinals are taking place on 4 February.

Zeina Mickawy qualified for the 2017 Winnipeg Winter Club Women’s Open semifinals. In the first game of the quarterfinal match between Mickawy and France’s Laura Pomportes, Mickawy went on the offensive. Pomportes on the other hand was trying to keep her cool. The game ended 11-9 in Mickawy’s favour. Pomportes regained her strength in the second game, ending it 11-5 in her favour. Mickawy took the lead of the following two games, ending them 11-2 and 11-7 in her favour, and bringing the match’s result to 3-2.

The last quarterfinal of the Winnipeg Open was between Canada’s Samantha Cornett and Egypt’s Nada Abbas. Cornett qualified to the semifinals, while Abbas exited the tournament.

In this match, Cornett played rationally and showed great discipline. However, Abbas played more aggressively and in the second and third game, she looked discouraged.

In calm water every ship has a good captain; this is what brought victory to the Canadian player, ending the match in her favour without losing any game. The match’s result was 3-0 (11-7/11-9/11-2).

The semifinals are taking place on 4 February. Mickawy is matching up with Australia’s Sarah Cardwell, and Cornett with her compatriot Danielle Letourneau.

At the 2017 Three Rivers Capital Pittsburgh Squash Open, Egypt’s Zahed Mohamed defeated Mexico’s Alfredo Avila by 3-1 (9-11/11-4/13-11/11-6). The Egyptian player qualified to the semifinals, where he is playing against New Zealand’s Campbell Grayson on 4 February.