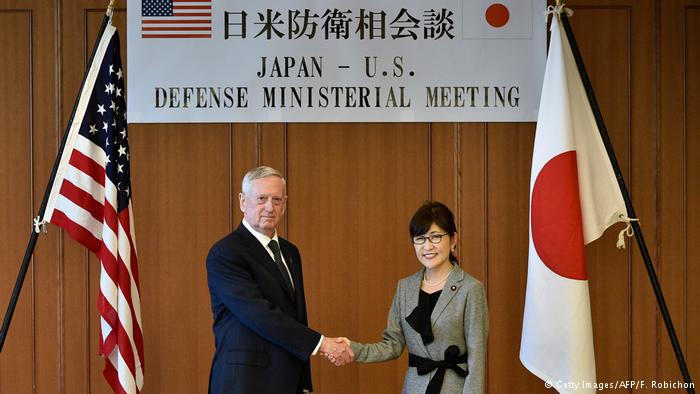 US Defense Secretary Jim Mattis has reassured Japan on Washington’s commitment to a defense treaty with Tokyo. Remarks by President Trump while campaigning had seemed to call such alliances in the region into question.US Defense Secretary Jim Mattis on Saturday concluded his first official visit to Japan by assuring the country of the United States’ resolve to stick by a defense treaty amid heightened tensions in the Asia-Pacific region.

The US-Japan security alliance was “a cornerstone for peace, prosperity and freedom” in the region, Mattis said after talks with his Japanese counterpart Tomomi Inada in Tokyo.

Mattis appeared eager to reassure Japan that the US was still committed to the alliance after comments made by US President Donald Trump during his election campaign that seemed to suggest that Japan and South Korea were freeloading off a US security umbrella.

“The US-Japan alliance is critical to ensuring that this region remains safe and secure – not just for now, but for years to come,” Mattis told a joint news conference with Inada, noting that Japanese Prime Minister Shinzo Abe had increased defense spending since taking office in December 2012, a move he said was “on the right track.”

Inada also emphasized the importance of the alliance at a time when regional security appears threatened both by nuclear threats from North Korea and an increasingly assertive China.

“It is extremely important for the alliance to be strong as the security environment in the Asia-Pacific region becomes more severe,” she said.

Both Mattis and Inada voiced concern at North Korea’s missile and nuclear program, with Pyongyang carrying out two nuclear tests and launching some 20 ballistic missiles in 2016 alone.

This concern is shared by South Korea, which the new Pentagon chief visited on Friday. Following talks in Seoul, during which he also reaffirmed US commitment to joint defense, he warned Pyongyang that any attack on the US or its allies would be “met with a response that would be effective and overwhelming.”

In Tokyo, Mattis also explicitly stated that the Trump administration would continue to defend Japan’s administration of the uninhabited Senkaku islands, which extend between Taiwan and Okinawa in the East China Sea and are also claimed by China and Taiwan, where they are known as Diaoyu and Tiaoyutai, respectively.

China has regularly sent ships into waters close to the islands in a challenge to Japan’s control, and has also been building on islands and reefs in the South China Sea, raising tensions in the region.

Although Mattis said that “freedom of navigation” in the South China Sea was “absolute,” he added that “at this time we do not see any need for dramatic military moves at all.”

His remarks on the Senkaku/Diaoyu island group drew a rebuke from China, with Foreign Ministry spokesman Lu Kang calling on the US to avoid discussion of the issue and reasserting China’s claim of sovereignty.

The 1960 US-Japan treaty was “a product of the Cold War, which should not impair China’s territorial sovereignty and legitimate rights,” a statement posted on the ministry’s website quoted Lu as saying.