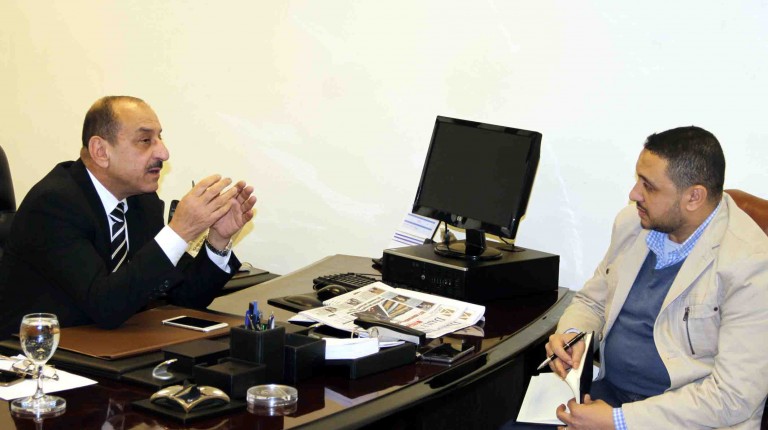 The Industrial Development & Workers Bank of Egypt (IDWBE) is negotiating with one of the biggest international companies specialised in the field of corporate restructuring, to conduct a comprehensive administrative reform to the bank, according to chairperson of the bank Maged Fahmy.

Fahmy said, in an exclusive interview with Daily News Egypt, that he assumed the position of chairperson of the bank in April 2016, when the bank was suffering deferred losses of EGP 1.5bn and supported by a loan from the Central Bank of Egypt (CBE) worth EGP 2.5bn.

He added that by the end of 2016, the bank had achieved high growth rates across all its indicators, where the bank financial position increased by 32%; 87% in deposits, 34% in loans, 114% in small- and medium-sized enterprises (SMEs), and 42% in retail banking.

What is the situation of IDBE in the market now?

I assumed my duties as chairperson back in April 2016. The bank was suffering several problems at the time, as a result of the conditions following the merger with the Egyptian Workers Bank.

The merger resulted in a weak financial status of the bank, and was required to configure many allowances for non-performing debts.

The size of deferred losses in April was estimated at EGP 1.5bn. The bank was living off a supportive loan provided by the CBE worth EGP 2.5bn.

Besides the problem of the bank’s financial position, it was also suffering a major problem with its administrative structure, next to a problem in its infrastructure.

The main administrative structure was problematic—most of employees were seniors, while, at the same time, salaries were very low compared to market standards.

How did you deal with these problems?

The first step was to identify the problems and their degree, which was what we did, followed by putting together a vision for dealing with them. We penned a work plan for a number of years and submitted the plan to the CBE for approval. We have already started implementing this plan.

What are the main features of that plan?

It may not be appropriate to disclose the exact details of the plan yet.

But, let me tell you that with regard to the reform of the administrative structure of the bank, which is very important for fixing the financial position and starting the next phase. We are currently negotiating with one of the largest international companies operating in the field of corporate restructuring to design a new administrative structure for the bank. This will also be supported by another financial institution that will pay the cost of restructure. This plan is expected to take about six months.

As a start to the reform process, the board of directors has recently issued a decision to promote Hamdy Azzam, executive board member, to deputy chairperson. We also brought in experts from outside the bank to lead several departments that should improve, such as human resources, risk management, and legal affairs. I also hired 100 new graduates, who were carefully selected, to benefit from their ideas along with the experienced employees.

The reform process has also included putting together a medical healthcare scheme for the bank’s employees and changed the fleet to look after our employees, as the old fleet consisted of mostly dilapidated and unsafe vehicles.

With regard to the reform of the financial structure, I submitted an unconventional idea to the CBE for this regard. We are currently waiting for its approval. Yet, we do have alternatives that we may resort to if the CBE does not grant the green light.

One solution which we turned to, is to exploit the main building of the bank located on 90 street in Fifth Settlement.

This building is of an area of 29,800 sqm. It was nothing but a concrete establishment abandoned for years. I signed a contract with the National Service Products Organization (NSPO) to renovate the building. We were lucky to sign the contract before the flotation of the Egyptian pound. The company has already started its work and expects to be completed within the coming 18 months.

All main departments will be moved to that building; however, only half of it will be utilised. The other half will be used through leasing or similar means. Moreover, we also plan to sell the department buildings in other places, such as Galaa, Talaat Harb, Emad El-Din, and Maarouf streets in downtown.

In order to also exploit the assets of the bank, we have revived our subsidiary International Co. For Leasing (Incolease) which was established with a capital of EGP 170m. The company has had a licence for financial leasing for months but never actually operated yet.

We appointed Eman Ismail as chairperson to the company. She was granted full powers and independence from the bank. Ismail is a renowned figure in the field. She is currently selecting her work team and designing the strategies. I expect the company to have a bright future in financial leasing during the coming period.

What about the bank’s performance indicators since you assumed its duties?

The bank has achieved great growth rates and results thanks to the efforts of all its employees.

By the end of December 2016, the bank has achieved a growth rate of 32% in its financial position, an increase of 87% in deposits to reach EGP 4.2bn, and 34% boost in loans to register EGP 5bn. The bank also increased its support to SMEs to reach EGP 1.2bn, and realised growth of 42% in retail banking to reach EGP 500m.

Furthermore, the bank also achieved significant growth in profits during the last year, but it is too early to disclose the exact figure at this time, especially as our statements are being reviewed by the Central Agency for Public Mobilization and Statistics (CAPMS).

What are the main sectors that were granted loans from the bank?

As a bank specialising in the financing industry, it is natural that this sector takes the largest proportion of the bank’s loans.

Industry accounts for about 55% of the total loan portfolio of the bank, and the rest goes to retail banking, mortgage finance, real estate, and other sectors.

The bank is also ranked fifth among the banks participating in the mortgage finance initiative launched by the CBE to finance housing units for low- and middle-income citizens, supported by a portfolio of EGP 125m. The funds were channeled to finance purchasing of 1,350 residential units, with more in the pipeline. We also signed an agreement with Gharbiya governorate to finance projects there to sell real estate units to low- and middle-income citizens.

We are also ranked fifth in financing SMEs with a portfolio amounting to EGP 1.2bn. This goes beyond 20% of our loans, which is the ratio stipulated by the CBE early 2016 over four years.

We continue to fund and support SMEs due to our belief in their importance in the revitalisation of the Egyptian economy and the elimination of unemployment, reducing imports and increasing exports, thus supporting the country’s foreign exchange resources.

Also, the bank will grant funds to organisations to relend them to micro enterprises. We are very interested in these projects, but they are very difficult to finance directly by the bank, as they require large administrative apparatus and high costs.

What about the retail banking activity?

I personally do not believe in retail for consumption purposes. We are facing circumstances in which you should not support consumption. Hence, the bank focuses on financing retail development, whilst making good profit. This way, we are serving our country while easing the burden on low-income citizens.

In this context, we are strongly taking part in the mortgage financing initiative. We also signed several contracts with governorates to connect houses to natural gas.

Under these agreements, the bank pays for the full cost of connecting gas, while owners repay instalments for this cost over a period of up to seven years. This supports low-income citizens, help the government’s plan, and bring benefit to the bank itself.

Besides retail activity for the purposes of development, we have started issuing credit cards in 2016, which was the only retail activity accepted by the bank, considering the role they have in supporting the state’s plan to rely further on electronic payments. We hope to obtain a proportion of the electronic payroll system implemented for public servants.

The bank also grants personal loans to employees of some companies in very limited circumstances to help them.

What about the geographic expansion of the bank?

We currently have 18 branches in 16 locations.

We aim to increase the number of branches to 50 branches over the next five years, focusing on Upper Egypt and some Lower Egypt provinces outside Cairo. We want to reach SME owners.

A large number of these branches may be small so that we do not have to pay huge investments.

What about the bank’s proceeds of foreign exchange after the flotation? And does the bank have any pending requests?

I want to explain that the size of collected hard cash mainly depends on a bank’s geographical expansion, its locations, and clients.

Due to the nature of the bank, most of the existing branches are located in the industrial places. However, the proceeds of the bank after the flotation increased, reaching $0.5m per day sometimes.

We, like the rest of the banks, cover customer requests on the US dollar according to the size of liquidity available. We only have pending requests of $5-6m, which is very little.

Where do you see the bank in the future?

The bank has a role that I try to maintain: supporting industry. We also hope to expand in financing SMEs even more.

In addition, we are working to change the mental image of the bank, own a strong financial position, spread further, and carry a non-conventional role to serve the national economy.

What are your expectations for the future of the US dollar, and the Egyptian economy after the flotation?

Some thought once we float the Egyptian pound, we wait for results—but this is not true at all.

The flotation was just a step. We should take more steps now, including work to boost resources and revenue of the state and coordinate between all state bodies to achieve this goal.

When we succeed in achieving this, the economy, the state, and citizens will all become better and the Egyptian pound will reach its fair value against the US dollar.

My last word would be that we have to work, produce, lower imports, boost exports, and pay taxes to serve this country; thus, fixing our conditions.