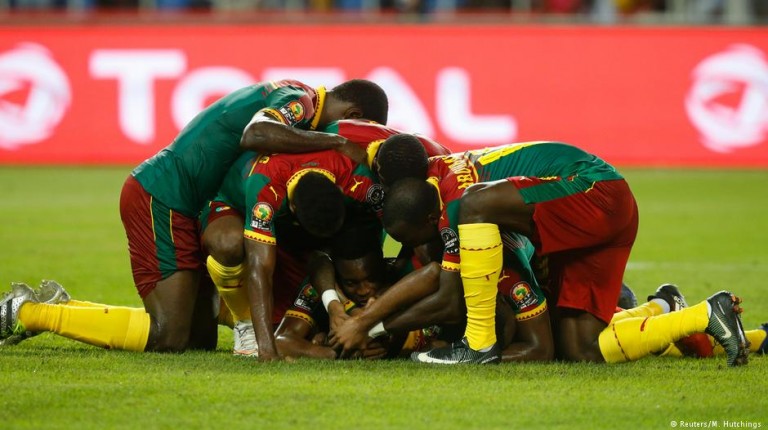 Two second-half goals completed a stunning comeback for Cameroon against overwhelming favorites Egypt. Just as the game seemed to be heading for extra-time, the underdogs scored late on to record a famous victory.Egypt 1-2 Cameroon

Cameroon, a team devoid of eight of their best players after they refused call ups to the Nations Cup, produced a modern football fairytale by beating record seven-times champions Egypt 2-1 in the final in Gabon.

The Indomitable Lions achieved the near impossible thanks to a stunning individual goal from Vincent Aboubakar two minutes from time, the bulky striker chesting the ball down, flicking it over a defender and burying a volley into the corner of the net.

Two substitutes, Nicolas Nkoulou and Aboubakar, had turned the game around in the second half after Mohamed Elneny’s opener for Egypt midway through the first period.

It is Cameroon’s fifth Nations Cup title and easily the most unexpected. The team and coach Hugo Broos had also been at war with their federation over bonuses during the tournament, nevermind having to cope with missing over half a team.

“It’s true that when I came to Cameroon nearly a year ago I found a group of players who were old, not motivated, so I had to change that,” Broos told reporters.

“So I brought in some new young players and we started working. We did a good job and now today we have a team. I am very happy that we won the Cup of Nations today and I am happy for the players — this is not a group of football players, they are a group of friends.”

Egypt coach Hector Cuper was gracious in defeat, the latest in a long line in finals for the Argentine.

“Cameroon deserved to win. I have deep sorrow for my players but it was too much for them, they were too tired. For myself, losing another final, I don’t want to say I’m getting used to it,” Cuper said.

Cameroon upset the odds when they overcame Ghana in the semifinals and the team demonstrated their irrepressible spirit again by dancing and singing their way into the stadium on their arrival for the final in Libreville.

The fans of the Indomitable Lions, who vastly outnumbered a small pocket of Pharaohs supporters, showed their teeth by booing the names of the Egypt players as they were read out.

A huge firework display then rounded off the closing ceremony before kickoff and FIFA president Gianni Infantino was among the dignitaries to meet the teams for the sell-out game.

Normally defensive Egypt, boosted by the return from injury of Arsenal midfielder Elneny and 44-year-old keeper Essam El Hadary shrugging off a cold, initially tried to be more enterprising than they were in the rest of the tournament with Mohamed Salah inevitably at the center of things.

A cute little ball in the first minute set Abdallah Said away but like so often in this competition, 21-year-old Cameroon goalkeeper Fabrice Ondoa was on hand to save.

Cameroon were too nervous and careless with their final ball in the first half to hurt their opponents and they were made to pay on 22 minutes.

Salah was involved again and Elneny was given too much room inside the box before firing high into the net from a tight angle. For perhaps the first time this tournament, Ondoa was found wanting. He may have thought Elneny was going for a cross, but it was still a lackluster attempt to save.

At the other end El Hadary also threatened to blot his great tournament when he flapped at a cross on 34 minutes but Cameroon, who lost centre back Adolphe Teikeu to injury on the half hour to be replaced by Nkoulou, could not profit.

Despite going behind, Cameroon fans continually pounded their drums and the decibels increased with the sight of striker Aboubakar – the top international scorer in the squad – coming on for the second half.

How Cameroon fans might then have wished Schalke’s Eric Maxim Choupo-Moting could also have joined the mix, but he was one of the players to turn down their call-up for the tournament.

In fact, it was the defensive substitute from earlier who would first make the difference.

Cautious Egypt reverted to type and the game looked like it was drifting towards the Pharaohs’ favorite score this tournament – 1-0 – until Nkoulou rose superbly to power in his header from Benjamin Moukandjo’s perfect free-kick on 59 minutes.

The Lyon defender beat Ahmed Hegazy too easily in the air and there were question marks over whether El Hadary could have done more too.

The Stade de l’Amitie went into raptures as the ball hit the net, the Cameroon fans among the 40,000 had begun to think it was not their year and the sudden delight made the noise even more ear-splitting.

Nkoulou headed a corner over shortly afterwards as the momentum completely shifted Cameroon’s way and captain Moukandjo later blazed over with a great chance.

It looked like it was heading for extra-time until second substitute Aboubakar produced his moment of magic, one of the great goals in Nations Cup finals.

The fairytale was complete. Supposedly the worst Cameroon side ever had lifted the continental title for a fifth time, with eight of their best players at home having not bothered to come. And Cameroon host this tournament next in two years.