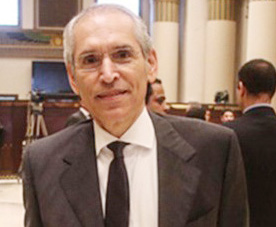 Head of the AEC, Abdel Hamid Demerdash, said that increasing exports will contribute significantly to achieving the business target for the sector, which has been suffering from increased production costs since the flotation of the Egyptian pound.

He noted that another factor is taking interest in agriculture in the Nile Valley and the Delta, as well as establishing a food safety authority to manage problems in the sector.

He pointed out that the flotation was a good move for exports in general, giving exports a competitive advantage abroad, as it helped exporters offer better prices on international markets.

Moreover, he stated that previously maintaining a fixed exchange rate was a mistake, falling into a norm of being in favour of imports only, which, he said, led the economy to fall.

Demerdash also noted that exports of agricultural products are sources for hard cash, as the sector has not been impacted by the country’s political turmoil.

He added that the tourism sector suffered after the Russian aeroplane crash in October 2015, but the agriculture sector remained in balance, as air shipping is limited to only 85,000 tonnes per year, versus over 3.4m tonnes exported through maritime shipping lines.

Several countries halted their flights with Egypt after the incident, with Russia in the forefront following the aeroplane crash, which killed 224 people.

Demerdash said that Arab markets account for 50% of Egypt’s agricultural exports, while the European Union accounts for 40%, with the remainder distributed amongst other countries.

He added that AEC aims to develop the export system by attracting peasants through local committees to hold agreements with exporters.

He highlighted several problems facing Egyptian exports, including a lack or low supply offered by contracts, which AEC seeks to overcome by encouraging farmers to partner with exporters.

He added that AEC is working to put together a map of farms of areas ranging between 15 to 20 feddans and cooperate with exporters. The plan, he explained, is to encourage farmers to cultivate one crop and channel the production for export.

He noted that, if successful, the experience will be extended to other crops.

AEC is now conducting an awareness campaign for farmers in the Delta to define the types of pesticides available to use for each crop, especially for vegetables.

The council has begun working in Ismailia and Fayoum and will move to other provinces in the coming period.

Demerdash also said that boosting exports requires cultivating new crops needed by foreign markets, adding that Egypt aims to join the International Union for the Protection of New Varieties of Plants (UPOV) to boost crops’ competitiveness against products from Turkey, Morocco, and Israel.

He pointed out that Egypt has been seeking membership in the union for many years as it will contribute to increasing exports to $3.5bn, up from $2.1bn.

Demerdash said that the AEC aims to expand in exporting to Africa, considering the low shipping costs and proximity to Egypt.

He explained that the AEC did not prepare a plan, but will cooperate with the Egyptian trade representation offices in Africa to target specific markets.

Demerdash said that the council, in cooperation with the Ministry of Trade and Industry, is looking for means to penetrate the African market in the coming period.

He noted that the current size of exports to Africa is very low, with plans to boost exports to 5% of all agricultural exports over the next five years.

Demerdash explained that the AEC will firstly send delegations with representatives from the Ministry of Agriculture to communicate with African countries on trade and their willingness to open their markets for Egyptian products.

He said that Egyptian exporting companies are working on modern agricultural mechanisms in terms of quality and specifications to suit the tastes of consumers.

Demerdash noted that exporters receive quality certificates after inspection and before shipping abroad.

In a different context, he said that the Fruit Logistics Exhibition is important for Egyptian agricultural crops, as it enables exporters to find new deals.

He added that even if exporters do not sign agreements during the exhibition, just submitting price lists, quality and specifications provides good start. He noted that companies also learn about new technologies used in irrigation and cultivation during the exhibition.

He pointed out that 88 Egyptian companies are set to take part in the exhibition.

This year’s round of Fruit Logistics is expected to see 2,700 companies from 120 countries, with visitors estimated at 80,000 from 130 countries worldwide.

He pointed out that 10 members of parliament will attend the conference to learn about the accurate situation of Egyptian agricultural exports abroad and study the mechanisms they can provide to stimulate growth.

He noted that MPs will meet with foreign companies and review investment opportunities in the Egyptian agricultural sector, such as the 1.5m feddans project and the 100,000 greenhouses project.