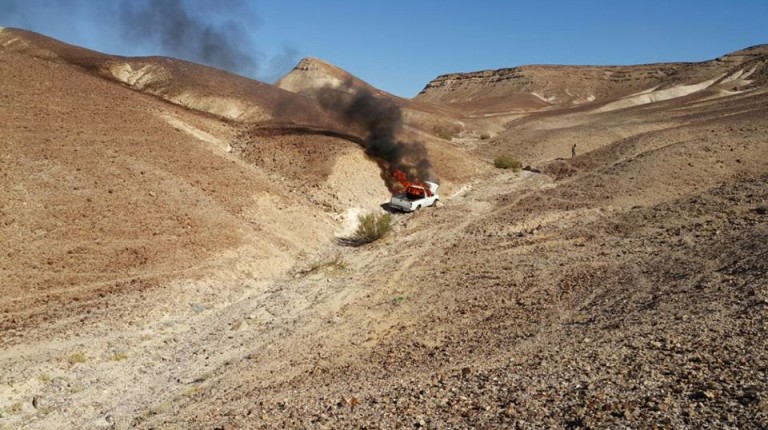 Army forces affiliated to the third field army on Monday managed to kill fourteen militants and arrested a further ten in a sweeping operation that is ongoing for the second consecutive week inside central Sinai, official army spokesperson Tamer El-Refai said in a statement.

The sweeping operations are being conducted with the cooperation of the Egyptian air force that launched airstrikes in mountainous areas that are being considered hiding and stationing points for the militants, who are believed to be members of the Islamic State (IS)-affiliated group of “Sinai Province.”

“Armed forces from the third field army managed to kill fourteen dangerous militants during a shootout in a sweeping operation, moreover they [the army] were able to burn five vehicles carrying bombs and a motorbike affiliated to the militants,” the statement read.

Also, the aforementioned forces destroyed a number of underground shelters that were being used by the militants. Inside these underground shelters, the army forces assigned to the sweeping operation found weapons, bombs, communication devices, and means of living related to militants, the statement added.

The statement further noted that the same forces of the third field army arrested a further ten wanted or suspected persons , in addition to the detonation of ten ‘improvised explosive devices’ (IED) that had been prepared on several roads, in order to target security forces.

“Forces assigned to secure crossings and ferryboats in the area of operations of the third field army managed to foil a smuggling operation of a number of drilling machines and welding tools that are being used in the manufacturing of IEDs. The smuggling operation was conducted through a cooling truck that had been stopped before crossing over to the Sinai Peninsula,” the army statement added.

Meanwhile, forces from the second field army continued their sweeping operations against militant stationing points in North Sinai. These operations resulted in the arrest of three militants.

The second field army’s five-day sweeping operation also resulted in the discovery of an underground tunnel on the border with Gaza and the destruction of six facilities and another seven huts used by militants, the army spokesperson’s statement continued.