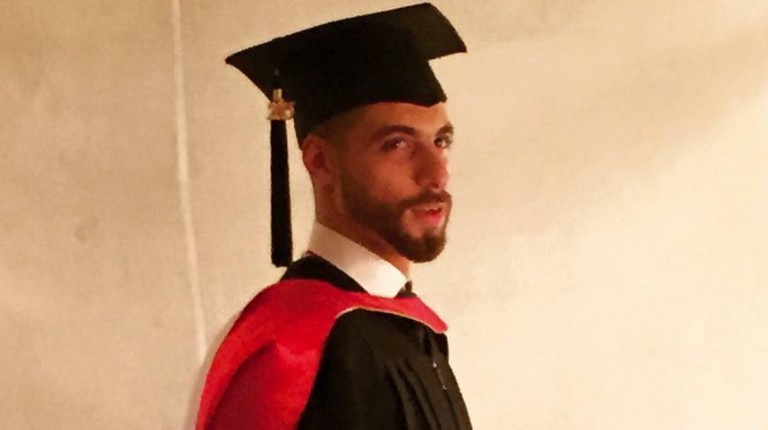 “The eye is tearing, the heart is bleeding and we are saddened by your departure. May your soul rest in peace, Mahmoud.” This was a post shared on the official Facebook page of Delta American Schools on Monday. Although the announcement did not say more about the death of its young graduate Mahmoud Bayoumi, a tragic story emerged about his possible murder.

Social media was flooded on Sunday night with photos and posts about Bayoumi, a few hours after the football match between Egypt and Cameroon, an event much anticipated by Egyptians. Reports said he was severely beaten by the staff of a cafe, called Keif Restaurant, in Heliopolis, described by clients as “fancy, with an arrogant staff,” where he was watching the game.

Youssef H. Muhammed, a friend of the victim and eyewitness to the incident, told Daily News Egypt on Monday that they had had a verbal altercation with the manager of the café. “This is because our female friends got up to leave but were stopped by a staff member who asked them to pay the minimum charge first, to which they responded that they were not told about a minimum charge upon arrival, and that they had barely stayed there,” Muhammed recounted.

He and the victim then took their complaint to the manager who insisted they should pay a charge to which they gave in. “The manager was surrounded by nearly 10 staff members who were insulting us,” he said.

Muhammed said that his deceased friend told the manager that their action to prevent them from leaving almost by force was “thug-like,” suggesting that this was the trigger for the staff to assault them, despite the fact that they had paid the money.

“I saw one of them pulling out a sharp object and hitting my friend. He was stabbed in the lung and this was the cause of death, according to the hospital’s medical report. The police came after we went to hospital and when I took them to the café to find the man who hit my friend, he had disappeared but the police took his colleague,” after which Muhammed said he did not know what happened next, since he was busy in the hospital.

Fouad Waguih, a duty manager at Cairo International Airport, was at Gusto café, next to Keif. “I heard screams coming from outside, and we were first told that a shisha fell on a girl. But when we went outside, I saw the guy soaked in his blood. Everyone there said and agreed on the same story — that he was assaulted by staff members,” Waguih told Daily News Egypt on Monday.

Waguih said he was one of the people who accompanied the injured victim to the hospital. “The closest hospital was Palestine Hospital and I went with them because my brother is a manger there but unfortunately they couldn’t do anything to help him in the emergency care,” he said.

Waguih said that he saw a “deep hole from which blood was coming out,” in Bayoumi’s chest. He explained that he was transferred to the nearby Cleopatra hospital but died within the next 10 minutes.

According to his testimony, the victim was very slim and the “stab was really deep.” Waguih confirmed that the police arrived at the hospital and cordoned the crime scene. He said that he was passing by the hospital at dawn and noticed the police presence.

“At first I thought it was a fight related to a sexual harassment incident or something,” he said, referring to common incidents that happen in crowded spaces, especially during football matches.

“What happened is unbelievable. When the family and friends of Bayoumi started arriving to the hospital I noted that they looked and spoke decently,” he added.

The restaurant’s listed phone numbers were out of service, and its Facebook page seems to have been closed. In reaction to the reported incident, several people on Facebook called for the boycotting of the restaurant and demanded legal accountability of the perpetrators.

According to available reports by eyewitnesses, there have been one or more people arrested.

It appears that Bayoumi’s hometown is Mansoura, a city in the Daqahleya governorate, where his school was also based and where the funeral is due to take place on Tuesday.

Two suspects arrested over death of assaulted client inside restaurant