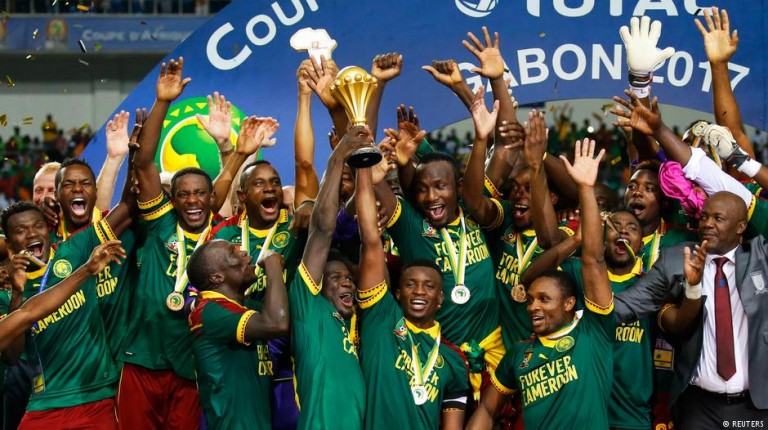 The African Nations Cup was plagued by low scoring, the usual empty seats and apathy among the people of host nation Gabon. But on the field, Cameroon’s surprise success gave us a wonderful narrative yet again.Almost all African Nations Cups follow the same pattern. Organizational difficulties at first, some political opposition and a lot of dull matches. But what makes the tournament special is that most editions produce a fairytale or heart wrenching story on the field.

Think unfancied Burkina Faso reaching the final in 2013 and, most notably, Zambia winning their first title a year earlier here in Gabon, less than a generation after almost their whole team had been killed in a plane crash in the very same country.

This year’s fable obviously belonged to winners Cameroon, a team judged to be one of the worst in the country’s history before the tournament in Gabon began in mid January.

The Indomitable Lions seemed to be suffering from an apparent lack of star quality in their ranks. The days of reaching the 1990 World Cup last eight with Roger Milla or winning their fourth continental title in 2002 thanks to the golden generation of Samuel Eto’o, Patrick M’Boma and the late Marc-Vivien Foe looked long gone.

Matters were made worse by eight players, including Schalke forward Eric Maxim Choupo-Moting and former Schalke teammate Joel Matip, refusing call-ups to the tournament and preferring to concentrate on club football.

The situation was a mess, with Belgian coach Hugo Broos heavily criticized in Cameroonian media. There was a further twist, with an all too familiar tale of a bonus row between the players, staff and the federation.

But in typical Nations Cup style, the opposite of what was expected happened. Cameroon bonded.

“We are still not on the highest level. We need to be much better, but it’s already a great beginning,” remarked tough taskmaster Broos after their unexpected triumph.

The journey began as they edged out hosts Gabon and their Borussia Dortmund striker Pierre-Emerick Aubameyang in the group stage and then defeated fancied Senegal in the quarter finals, 21-year-old goalkeeper Fabrice Ondoa adding to his burgeoning reputation by saving the crucial spotkick.

The tournament was suddenly opening up with holders Ivory Coast also suffering a shock and exiting in the group phase.

“There were a lot of surprises because at first some teams were eliminated who were favorites like Ivory Coast, Senegal and even Gabon. We believed that Gabon could win this tournament at home but they had a preparation which was not so good and they were punished for that,” Nigeria coach Gernot Rohr, whose side did not qualify, told DW.

Cameroon thoroughly deserved to beat Ghana 2-0 in the semis but the final looked an altogether more difficult challenge.

Record seven-times champions Egypt had lumbered through, with three 1-0 wins in a row in the group and last eight. Their defensive style of play under storied coach Hector Cuper was never easy on the eye, especially in the semifinal win over unlucky Burkina Faso on penalties, but it was highly effective.

In 44-year-old goalkeeper Essam El Hadary they had their own version of Cameroon’s fairytale. He was not included in the starting lineup for the opening group game, apparently robbing him of the chance to break the record as the oldest player to ever play in the tournament. But only 25 minutes in against Mali, first choice Ahmed El Shenawy collided with the post and El Hadary came on to great acclaim.

He kept Egypt going with key saves in the tournament, most notably stopping two consecutive Burkina Faso spotkicks to turn the semi the Pharaohs’ way.

But he could do nothing to stop Cameroon’s remarkable comeback in the final, fighting back from 1-0 down at half-time through substitutes Nicolas Nkoulou and Vincent Aboubakar. The 88th minute winner from Aboubakar was a stunning individual goal – arguably the greatest ever in Nations Cup finals.

Off the field, things did not go quite as swimmingly. Venues were again empty or half full for much of the tournament with the Gabonese seemingly weary over hosting the tournament again after just five years.

The country’s opposition party also called for a boycott of the tournament after disputed elections in August won narrowly by President Ali Bongo sparked violence. The opposition believes money was wasted on the Nations Cup and should have been spent on hospitals and schools.

The Gabonese people’s love for supposed favorite son Aubameyang was also little in evidence. There were plenty of Chelsea, Manchester United, Barcelona and even Bayern Munich shirts among the population, but Dortmund Aubameyang jerseys were nowhere to be seen.

Despite some local apathy, Confederation of African Football (CAF) Secretary-General Hicham al-Amrani told DW the governing body was satisfied with the 2017 edition.

“I think we had a beautiful tournament. We had some issues, of course, in terms of organizational issues that happen from time to time – specifically, we regretted the quality of one venue in particular over the four,” he said.

“But we are pretty happy about the investment and work done by the local organizing committee, about the quality of the matches and the goals scored.”

CAF will be even happier with a classic final, after so many disappointing showpieces in this tournament down the years.

Cameroon, we salute you.