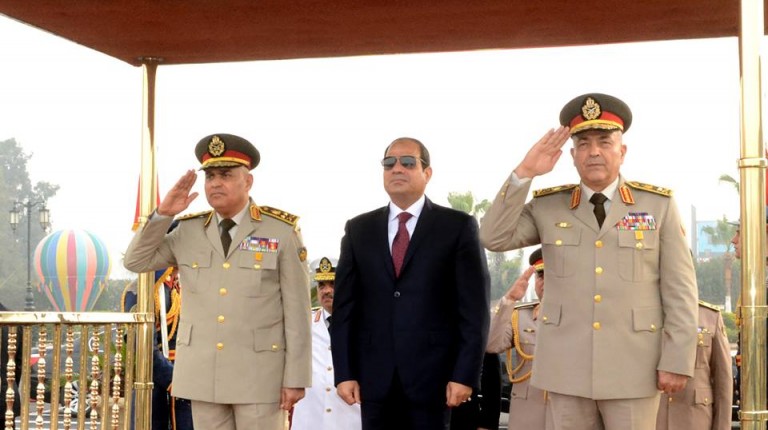 The official spokesperson of the Egyptian presidency, Alaa Youssef, said in the statement that the meeting was part of the consecutive meetings held by Al-Sisi with both councils to inspect the security conditions in the country and to review all plans to face terrorism.

“President Abdel Fattah Al-Sisi instructed the armed forces and the police to continue their coordination to foil terrorist groups’ attempts to threaten the security and safety of all Egyptians,” the statement read.

Moreover, Al-Sisi ensured the attendees of the necessity to continue taking the necessary measures to secure important institutions in the country, stressing the importance of keeping high training levels to protect Egypt’s national security.

Meanwhile, military forces affiliated to the third field army managed on Monday to kill 14 militants and arrested 10 others in a sweeping operation that has been ongoing for the second consecutive week inside central Sinai, army official spokesperson, Tamer El-Refai, said in a statement.

The sweeping operations are being conducted with the cooperation of the air force, which launched airstrikes in mountainous areas that are considered as hiding and stationing points for the militants, whom are believed to be members of the Islamic State (IS)-affiliated group of “Sinai Province.”

“Armed forces from the third field army managed to kill fourteen dangerous militants during a shootout in a sweeping operation, moreover they [the army] were able to burn five vehicles carrying bombs and a motorbike affiliated to the militants,” the statement read.

Also, the aforementioned forces destroyed a number of underground shelters that were being used by the militants. Inside these underground shelters, the army forces assigned to the sweeping operation found weapons, bombs, communication devices, and means of living related to militants, the statement added.

The statement further noted that the same forces arrested ten other wanted and suspected people, in addition to the detonation of ten improvised explosive devices (IED) that were prepared to target military forces and the police.

Forces assigned to secure crossings and ferryboats in the area of operations of the third field army managed to foil the smuggling operation of a number of drilling machines and welding tools being used in the manufacturing of IEDs.

Meanwhile, forces from the second field army continued their sweeping operations against militant stationing points in North Sinai, resulting in the arrest of three militants.

Five days of sweeping operations from the second field army also resulted in the discovery of underground tunnels along the border with the Gaza Strip and in the destruction of six facilities and seven huts used by militants, the army official spokesperson statement continued.