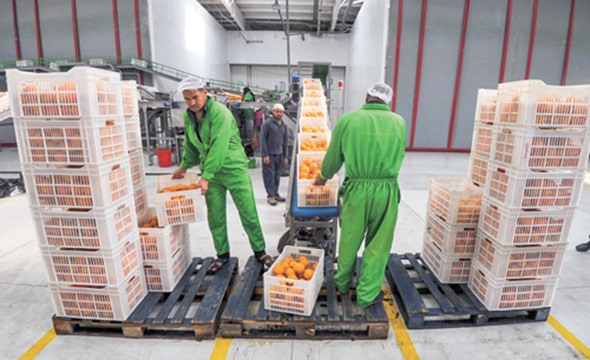 The Egyptian Company for International Trade Belco aims to achieve exports worth €9.5m this year, compared to €9m in 2016, an increase of 5%.

Sherif El-Beltagy, the company’s chairperson, said that Belco does not expect a significant increase in its exports this year due to its inability to increase production, especially as it has not completed the planting of crops since last summer.

El-Beltagy added that the company operates in the domestic market in parallel with foreign markets.

The company exports 60% of its green beans production, 70% of its onions, and 65% of its grapes. The residual percentages of each crop go to the domestic market.

He pointed out that England used to acquire 80% of the company’s exports several years ago, as its market made quality and nutritional value the top priority, but supermarket chains have recently become attracted to lower prices, which makes quality secondary.

The company exports a list of fruits and vegetables, including green beans, green onions, lettuce, grapes, and peaches with total amounts that reach up to 9,000 tonnes per year.

He said that new markets have opened up to Egyptian products and it takes several years to gain confidence in them.

He added that Egyptian crops should be made available worldwide in most markets, including those in Africa and east Asia.

He explained that Egypt’s exports to Africa are weak, and great effort is required in order to increase exports to the continent over the coming years. He said it is necessary to ask about what these countries need and how their demands can be achieved.

He pointed out that Africa’s markets need to improve their transportation options and create ways to increase exports and to establish sustainable commercial transactions, to ease access to them without losses.

He said that east Asian countries are the most important to Egypt in the current period, especially after Egypt’s local products infiltrated the Chinese market through citrus crops several years ago, and grapes last year.

He added that, according to the first assessment of the Beijing market, it would not account for large quantities of grape crops this season; however, the exported products should be of high quality to gain consumer confidence.

He predicts that the amount of grapes exported to Beijing this year will not exceed 20,000 tonnes; however, there is a great opportunity for Egypt to increase exports in the coming years in the case of compliance with international standards in exports and offering competitive prices.

China’s markets import about 360,000 tonnes of grapes annually from several countries, including Spain, the Netherlands, Italy, and the United States.

He pointed out that to start with relatively small quantities of high-quality exports is better than large quantities of low-quality products.

He said that the market of agricultural products is expected to increase during the current year, particularly following the decision to float the Egyptian pound. This will raise the value of exports abroad, despite the increase in production costs after the increase in the prices of petroleum products, especially diesel.

He explained that the devaluation of the local currency’s value against major worldwide currencies helps to increase the competitive of our products against the products of other countries.

The Central Bank of Egypt’s (CBE) decision to float the pound in November 2016 increased the price of the US dollar to EGP 18, compared to EGP 8.88 before the flotation.

He added that the decline in the value of the pound is a prime reason to increase exports and decrease imports, which encourages the development of local industry in all sectors.

He pointed out that local manufacturing reduces production costs, which the market has suffered from during the last period. Therefore, it is important to increase consumer power domestically, and to attract customers to the Egyptian product abroad.

It will also benefit farmers with better yields compared to revenues from past years, through companies offering better prices on crops to be exported.

He said that export markets are suffering from price speculations, which occurs between Egyptian exporters, especially in citrus exports, and thus Egyptian exporters must realise that competition is with other markets, not between each other.

He added that some exporters provide many offers with cheap prices that do not have a profit margin, just to acquire customers from other Egyptian exporters.

He explained that these actions are detrimental to exports in general, as they make importers the main controller of prices and not the exporters.

The Export Council for Agricultural Crops is working to develop an awareness plan for exporters on the methods of dealing with foreign markets, and how to increase the size of their business without damaging the market.

He pointed out that the German market acquires a sizeable percentage of Egyptian agricultural crops, better than England and the Netherlands.

He said that, to increase exports, we need to develop products through the cultivation of new varieties that fit with global consumers’ tastes, which requires the need to join the International Union for the Protection of New Varieties of Plants (UPOV).

Belco to maintain its exports at $7m this season