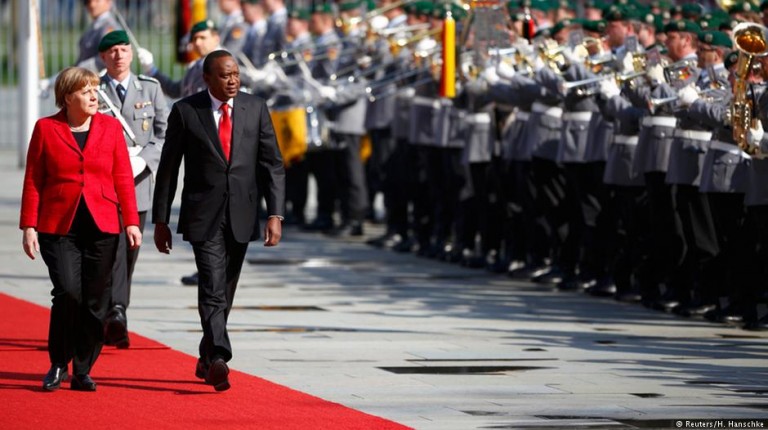 Relations between Germany and East Africa are generally good. West Germany was the first country to recognize Kenya after it gained independence from Britain. German President Joachim Gauck visited Tanzania in 2015. Germany and Tanzania are traditionally close. Before the end of World War I, mainland Tanzania was a German colony. In 2015, former German foreign minister Frank Walter Steinmeier also visited Kenya and Uganda and Development Minister Gerd Müller was in Kenya last year. There have also been official visits in the other direction. Last year Uhuru Kenyatta became the first Kenyan president to make a state visit to Germany since 1999. Ugandan President Yoweri came to Germany on a private trip during which he participated in a German-African Economic Forum.

What East Africa expects from Germany

All three countries – Kenya, Uganda, and Tanzania – are battling with poverty and unemployment. Their heads of state and government are interested primarily in German development aid and investment. They are less enthusiastic about debates on human rights or democracy. Uganda’s longtime President Yoweri Museveni amended his country’s constitution some years back so he could stay in power. Kenyan President Uhuru Kenyatta was in the dock at the International Criminal Court. The German government is reluctant to criticize them publicly.

What Germany expects from East Africa

German political leaders are also interested in closer economic ties. Indian and Chinese firms are expanding in East Africa but most German companies are lagging behind. German policymakers also note the growing strategic significance of the region. Kenya, which shares borders with two trouble spots – South Sudan and Somalia – is regarded as a useful bulwark of stability and an ally in the fight against terrorism. Migration is another factor. The world’s biggest refugee camp, Dadaab, is located on Kenyan territory. Uganda has also taken in almost 580,000 refugees from South Sudan. The German government is supporting both Kenya and Uganda in order to prevent migration flows to Europe.

East African nations import mostly industrial machinery, chemicals and cars from Germany. The German automaker Volkswagen, for instance, opened a new production plant not far from the Kenyan capital Nairobi in December 2016. A German-East African technical college is also due to open in Nairobi shortly. East African exports to Germany are mostly agricultural produce such as coffee, tea and fish from Tanzania and Uganda. Germany’s florists find that Kenyan roses are popular with customers. But these trade ties could be expanded still further. In 2013, only 1.6 percent of Kenyan exports went to Germany and only 2.6 percent of Kenya’s imports came from Germany. Kenya’s neighbors, as well as India and China, are far more important trading partners.

For decades, East Africans’ perception of Germany was shaped by two televison programs shown on local networks,”Football Made in Germany” and “Derrick,” the later being a crime series which ran from 1974 to 1998 and featured a lugubrious German detective of the same name. In Tanzania, Deutsche Welle’s radio and television programs are also a source of information about Germany. But what do Germans know of East Africa? Elderly Germans will recall the documentary “Serengeti Darf Nicht Sterben” (Serengeti Shall Not Die). The book accompanying the award winning film about the national park became a bestseller in Germany. In turn, Tanzania also has a number of historical remnants from Germany. A German colonial-era passenger ship and former gunboat, the Liemba, is still operating on Lake Tanganyika. Around 8,700 people in Tanzania, Uganda and Kenya are learning German. The number of Germans learning Kiswahili is not known, but the language is taught at several German universities. Kiswahili, which is in effect a Bantu language with influences from various trade languages, also contains a number of German words. The first Kiswahili grammar was written by a German missionary Johann Ludwig Krapf.

Kenya’s beaches and national parks are popular with Germans who make up the fourth largest group of foreign tourists visiting the East African country. Lufthansa resumed direct flights from Frankfurt to Nairobi in 2015 after a break of 16 years, much to the delight of the Kenyan tourism industry. German visitors also flock to see the Serengeti National Park and Africa’s tallest mountain, Mount Kilimanjaro, in neighboring Tanzania.