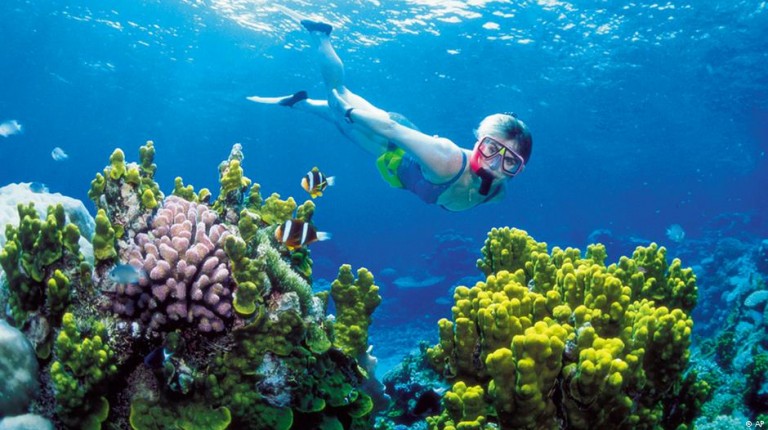 A severe bleaching event last year prompted reports of the Great Barrier Reef’s death. But tour operators say much of the reef still thrives, and their boats can help protect it.It’s a tranquil afternoon on the Whitsunday Islands at the southern end of Australia’s Great Barrier Reef. A tour boat sits moored on a thin slice of white sand as snorkelers marvel at coral beneath crystal clear waters.

But the boat’s captain, Mike Evans, says these days some visitors have worries on their minds.

“I’ve actually had a few people tell me that they’ve come to see the reef before it’s too late,” he told DW. “I tell them that our area’s fine but they are having bleaching problems up north.”

Last year, there were reports of the largest coral die-off ever recorded at the Great Barrier Reef. The reef’s northern region lost 67 percent of its shallow-water corals in 2016, prompting some media to claim the reef was “already dead.”

The damage didn’t extend as far south as the Whitsunday Islands. But tour operators in the coastal town of Airlie Beach, where visitors disembark to explore the islands, say more and more people are coming to see the reef before it vanishes.

“I heard that because of the global warming there was degradation of coral reefs,” Sergi Altadill, visiting from Barcelona, told DW. “I was thinking this is the moment to come because in a few years there is no more coral reef in this area.”

It isn’t just Australia’s reefs that are under threat. In December, the United Nations Environment Program published a study showing that with current trends, 99 percent of the world’s reefs will suffer severe bleaching annually by the end of this century.

Bleaching occurs when the water becomes too warm, causing coral to expel the algae that gives it its vibrant color. The result isn’t just a white hue that disappoints divers – the coral is also left vulnerable to starvation and disease.

Still, behind the UN study was a development that offers some hope. It drew on new high-resolution projections based on global climate models to predict when and where coral bleaching will occur.

Roger Beedon, director of tourism and stewardship at the Great Barrier Reef Marine Park Authority, says this opens up new possibilities to use data collected by scientists and tour operators.

“Coral reefs are made up of animals, but they behave a bit more like forests because many of them can live for hundreds of years, and they can lock up a record of what has happened to them during that period of time,” he told DW.

“They’re a bit like trees. You can look at growth bands within those corals, and you can see how well they were doing each year.”

This information about the past can be used to model future developments, and combined with current observations gathered by tour boats. That helps focus protection efforts on areas at risk, and has implications for global conservation efforts.

“One of the important things about reefs is they can give us insights about what’s happening at global scale,” Beedon says.

Cruise Whitsundays, the largest tour operator in the area, has been participating in a monitoring program called Eye on the Reef since 2007. Tour boats survey the sites they visit regularly and provide data to help manage any impacts they find, including bleaching.

“What’s missing in media reports is that the degree the reef is affected varies widely from insignificant to severe,” she told DW.

“It’s the northern section of the Great Barrier Reef that is currently experiencing a major coral bleaching event. That area is approximately 1,590km from our pontoons. People who have lived in this area for more than 20 years have observed that the reef around our pontoons is in the best condition they have ever seen.”

Not all locals agree. Sandra Williams is a campaigner with the Australian Marine Conservation Society who lives in Airlie Beach.

“I’m fortunate enough to have seen the Great Barrier Reef at its most magnificent best,” she told DW. “But I also know that people alive now and those coming in the future will never have the opportunity to see what I’ve seen on the reef, because it is a very different place even now.”

Williams acknowledges that tour operators in the Whitsundays have upped their reef monitoring activity and educate visitors about environmental threats.

“Many of the boats that go out daily are actively engaged in reporting changes they see to scientists and government bodies to build up that picture of what is happening locally in the marine environment,” she says.

“People are very engaged and proactive in looking after their patch, and also in trying to shift government regulation and policy to enact better reef protection.”

But she says this isn’t the case with some operators in other parts of the reef.

“They don’t want it publicised that the reef is under threat or that there’s been coral bleaching because they see an immediate negative impact on their business.”

And tour boats themselves pose a threat to the reef, both through engine pollution and by scraping the coral surface.

Operators like Cruise Whitsundays are part of an eco-certification scheme which means they take precautions above and beyond what is legally required.

The Great Barrier Reef Marine Park Authority also restricts their movements with a complex system of permitting and zoning, which actively engages tour operators in a communication loop. The authority uses information their boats gather to identify vulnerable areas of the reef and restrict activity there.

Minimizing damage from tourism is vital given the threat from climate change. And with extreme weather events happening more frequently, this is not limited to bleaching. Right now, one of the main concerns for those protecting the reef is ensuring corals are in the best possible health if and when a cyclone hits.

“We’re now in the middle of our summer period – this is traditionally our cyclone season,” says Williams. “For first time in three years we’re actually having a wet season, and I expect somewhere at least once in the coming months, somewhere on the coast, there will be a massive cyclone.”

Williams says if a cyclone hit a northern area like Port Douglas, where two thirds of the coral is already dead, the impact on what remains could be devastating.

“It doesn’t have the resilience to fight back from that.”