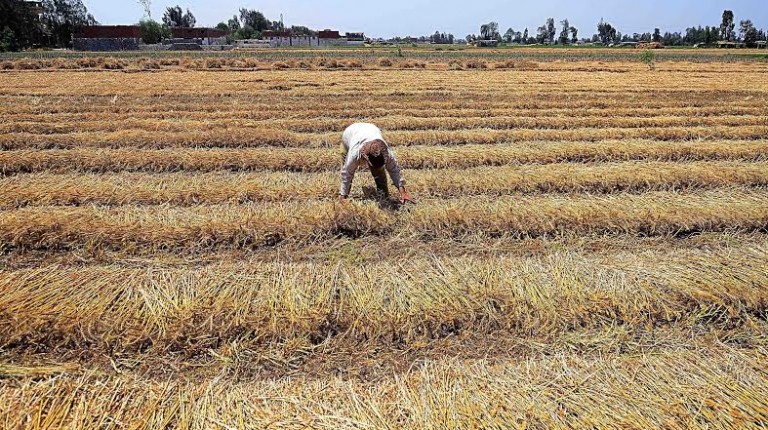 In its most recent study on strategic crops in Egypt, the Central Agency for Public Mobilization and Statistics (CAPMAS) said that wheat productivity could drop from 2.69 tonnes per acre to 2.2 tonnes per acre if the average temperature increases by one degree Celsius. According to CAPMAS such a temperature difference could result in a drop in annual production, from 9m tonnes in 2014/2015 to 8.3m tonnes in 2024/2025.

CAPMAS added that if temperature rises by two degrees Celsius by 2024/2025; the productivity of wheat would drop to 2.09 tonnes per acre in 2024/2025, which would cut annual production to 7.9m tonnes.

And if temperature rises by two degrees Celsius, rice productivity would fall to 3.69 tonnes per acre, decreasing annual production to 4.2m tonnes.

CAPMAS explained that there are two ways to compensate for the potential drop in annual wheat production caused by higher temperatures. The first method is reclamation of ​​land ranging between 73,000 and 990,000 acres at a cost of $162m-2.2bn. The second method is importing $39m-436m of wheat to compensate for the annual production drop caused by a one degree Celsius rise in temperature.

According to CAPMAS, if temperatures rise by two degrees Celsius, the area of ​​land reclamation will be at least 86,000 acres which costs between $191m-2.7bn. Alternatively, importing the wheat would cost $46m-519m.