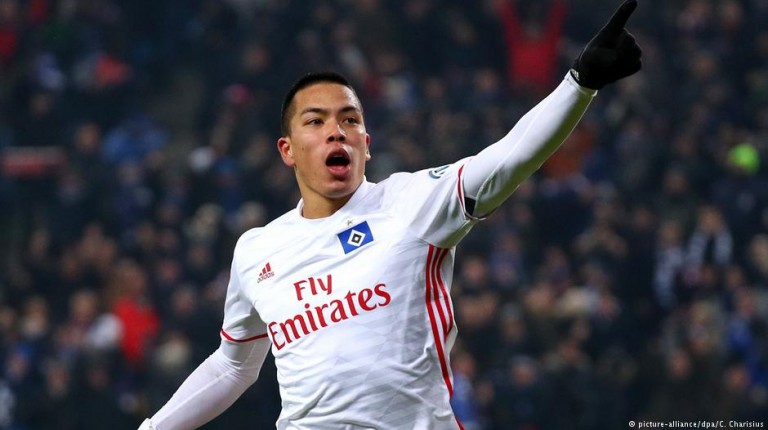 Hamburg saw off Cologne and Arminia Bielefeld came through a tense penalty shootout in the German Cup on Tuesday night. They were joined in the last eight by Bayern Munich and Borussia Mönchengladbach.Hamburg 2-0 Cologne
(Jung 5′, Wood 76′)

Hamburg scored a goal in each half to dump Cologne out of the German Cup and reach the last eight.

Gideon Jung gave the three-time champions a dream start with a close-range finish inside five minutes, and Cologne never recovered.

Hamburg, liberated from their Bundesliga struggles in the Cup, doubled their lead 14 minutes from the end through Bobby Wood, whose low finish nestled in the bottom corner.

Arminia Bielefeld sneaked into the quarter-finals with a penalty shootout victory over fourth-tier Astoria Walldorf.

Bielefeld took the lead through Tom Schütz and seemed on course for a slender victory, but Marcel Carl’s opportunistic header for Walldorf leveled the tie and forced extra time.

Walldorf held on through extra time to force a shootout, but Nicolai Gross and Jonas Kiermeier missed their penalties, allowing Arminia’s Stephan Salger to score the winning penalty to send the second-tier side through.

Carlo Ancelotti fielded a strong side, but left Thomas Müller on the bench. Bayern were rewarded early on when Costa’s strike from the edge of the box clipped off Luiz Gustavo, wrong footing Wolfsburg goalkeeper Koen Casteels.

Wolfsburg held firm throughout the contest and limited Bayern to a few half chances, but rarely threatened Manuel Neuer’s goal and Bayern came through as they look to defend their crown.

Gladbach’s Oscar Wendt low finish put Gladbach 1-0 up inside 12 minutes before Pinter’s dismissal for a rash studs up challenge on Christoph Kramer.

Greuther Fürth rediscovered some composure after a nightmare start, but Gladbach eased into a 2-0 lead through Thorgan Hazard’s penalty shortly before half time.

Gladbach were rarely tested and will be in the draw for the last eight.