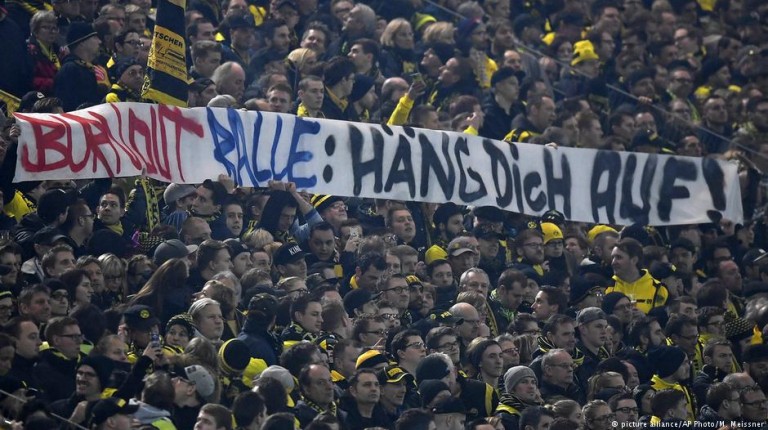 After the shocking attacks on RB Leipzig fans in Dortmund on Saturday, German FA chief Reinhard Grindel has called for an urgent change to Germany’s football culture. Grindel wants to see an “uprising of the decent.”A number of Leipzig fans and four police officers were injured when Dortmund supporters pelted visiting fans with stones and cans ahead of the clash between the teams.

Reports from the ground confirmed that there were even children among those targeted, while a number of offensive banners were unfurled in the stands at Signal Iduna Park.

For Grindel, enough is enough:

“In view of the violent riots and the massive threat to families and children outside the stadium, as well as the contemptuous banners in the stands, words of indignation are not enough,” reads his statement on the German FA website.

“It’s important now to have a fundamental debate resulting in a joint stance against any form of physical or psychological violence. We need an uprising of the decent in the stands, and a dissociation with violence. And we need public prosecutors to prosecute the perpetrators and ensure that they are given sentences quickly and (that are) commensurate to their actions.”

As well as the censure they’ve received from authorities, politicians and fans of other clubs, Dortmund could also face sanctions from the DFB as a result of the banners.

Other German clubs have also come out in condemnation of the violence and its impact can already be seen at local rivals Schalke. Regional police took the unusual step of calling a press conference more than a week before Schalke’s Europa League tie with Greek side PAOK, citing the violence in Dortmund – as well as violent clashes between the sides in 2013 – as reason for the caution.

Dortmund chief executive, Hans-Joachim Watzke has been vocal in his criticisms of RB Leipzig – controversially backed by Red Bull – in the past but condemned the behaviour of his club’s fans on Monday.

“We will do everything in our power to stamp this out once and for all,” said Watzke, while also promising to find those responsible.