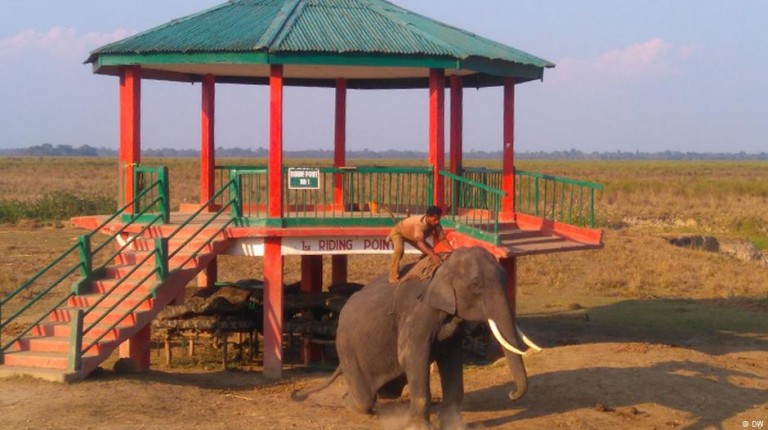 Every year, the monsoon floods parts of India’s Assam region. This often hurts wild animals like elephants or rhinos, or separates them from their herds. A rescue station in the area steps in to help.Project goal: Rescue wild animals that are orphaned, hurt or separated from their mothers or herds. Treat them and then release them back into the wild.
Project partner: International Fund for Animal Welfare (IFAW), Wildlife Trust of India (WTI) and Assam Department of Environment & Forests.
Project implementation: The IFAW-WTI Wildlife Rescue Station includes a veterinarian’s office, an operating room and a laboratory. Five mobile clinics also allow the teams to reach wildlife in the remote regions of Assam.
Project size: Aside from the treatment rooms, the station also has expansive enclosures for birds, reptiles, ungulates, primates, big cats and special facilities for raising very young elephants and rhinoceroses.
Biodiversity: The adjacent 430 square kilometer Kaziranga National Park is the most important protection area for the Indian rhinoceros in the world and is home to more than 70 percent of the entire population. The park is also home to many other species such as Bengal tigers, Asian elephants, wild water buffalo and barasingha.

Kaziranga National Parks in the Indian state of Assam is home to Indian rhinos, elephants, buffalo, tigers and many other wild animals. But the park is flanked by the river Brahmaputra, which regularly floods large areas during the monsoon season. As a result, many wild animals get separated from their herds or mothers and stranded in areas outside the park. Often they even need to be saved from drowning. The IFAW-WTI Wildlife Rescue Station, which is located next to the park, takes care of them. Here, the animals’ injuries are treated, they are brought back to strength and animals that have lost their herd are brought together in new small herds of orphans and re-released into the wild. Among the 3,500 animals that have already been cared for by the park are also leopards, Asian black bears, pythons, different types of antelopes, owls, storks, Asian small-clawed otters and cloud leopards.

A film by Wiebke Feuersenger

Balkan Lynxes – the last of their kind

Dining out in Cairo’s hotels: Indian classics on the Silk Road