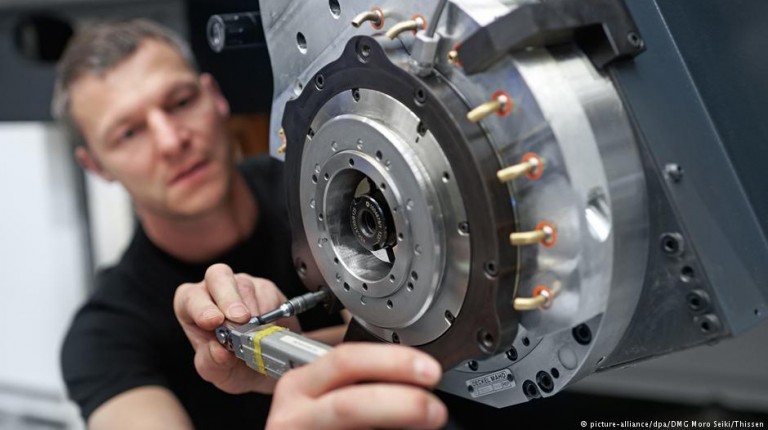 A leading German industry group representing the interests of small and medium-sized enterprises has raised its growth forecast for Europe’s largest economy. Optimism prevails despite Brexit and other worries.The Association of German Chambers of Industry and Commerce (DIHK) on Wednesday said it had raised its growth forecast for the German economy despite a growing number of economic and political uncertainties.

The association said it expected German gross domestic product to expand by 1.6 percent in 2017, up from its October estimate of just 1.2-percent growth.

“The situation of businesses across Germany is better than originally thought,” DIHK Managing Director Martin Wansleben told reporters in Berlin. His association is thus a bit more optimistic about the economy in Europe’s powerhouse than the government in Berlin.

The DIHK also predicted that an additional 350,000 people would be employed this year as the domestic labor market remained robust, with employment to be driven by the construction sector and the export industry.

The ghost of Brexit

In an interview for the German newspaper “Rheinische Post,” DIHK chief Wansleben said many German companies had put on hold their planned investments in the UK as the country prepared to leave the European Union in line with the outcome of a pro-Brexit vote.

He pointed to the strong presence of German firms in Britain, saying they had set up production facilities there worth about 120 billion euros ($128 billion) and created some 400,000 jobs.

“The pro-Brexit decision has already had an impact,” Wansleben said, adding that German exports to the UK dropped by 3 percent last year.

“When Brexit enters the phase of implementation, the negative effect will be even stronger.”

A full week of fashion in Berlin