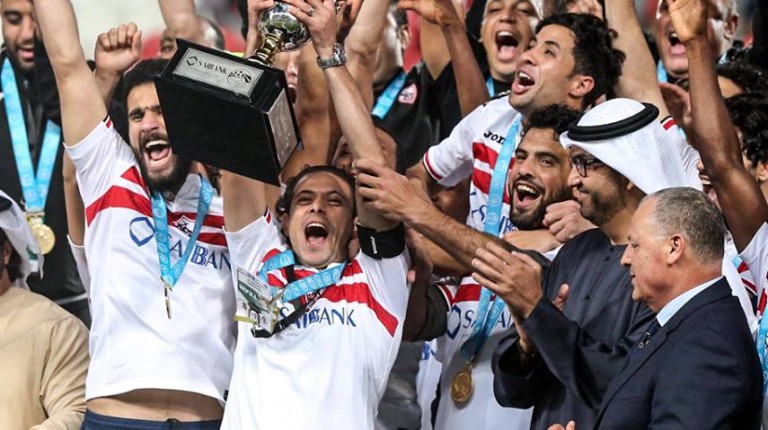 Zamalek SC heartened its fans after it defeated its rival Al-Ahly 3-1 on penalties in the Egyptian Super Cup, which was held at Mohammed bin Zayed Stadium in the United Arab Emirates’ (UAE) capital of Abu Dhabi.

Zamalek goalkeeper Mahmoud Abdel Rahim, known as Gennesh, led his team to winning the Super Cup title for the third time and delivered happiness to all the fans of the White Knights, marking a new beginning in its historic struggle with its rival Al-Ahly.

The victory means more than just the title, as it was leading the club to break some records of Al-Ahly, putting an end to many of its historical records.

Zamalek head coach Mohamed Helmy has eliminated his personal complex with Al-Ahly head coach Hossam Al-Badri, who succeeded in defeating him in the previous two matches. The first was in 2010 when Helmy was head coach of Mansoura and Al-Badri was the head coach of the Red Devils. At the time, Al-Ahly beat Mansoura 2-1. The second time was in December 2016, when Al-Ahly beat Zamalek 2-0 in the Egyptian league.

Moreover, it was the first victory achieved by Helmy over Al-Ahly throughout his coaching career with different clubs. There has been a big complex for Zamalek fans ahead of the Friday match.

Zamalek is probably delighted over winning its third Super Cup trophy at the expense of nemesis Al-Ahly, the record winners with nine titles under their belt, including four after victories over the White Knights in 2003, 2008, 2014, and 2015.

The winning series of Al-Ahly started in 2003, as the Red Devils beat Zamalek 3-2 in penalties. In 2008, Al-Ahly defeated Zamalek 2-0—with goals by midfielders Moataz Eno and Ahmed Hassan. The third win was in 2014, when Al-Ahly beat Zamalek 5-4, again in penalties. The last Super Cup trophy won by Al Ahly was in 2015, when it defeated Zamalek 3-2, with a goal by Abdullah Saied and two goals by Momen Zakaria for Al-Ahly, while Omar Gaber and Mahmoud Kahraba scored Zamalek’s two goals.