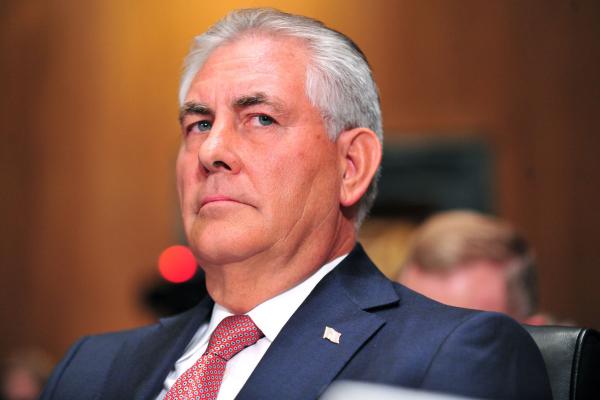 Egyptian Foreign Affairs Minister Sameh Shoukry made a phone call to the new US secretary of state Rex Tillerson on Saturday evening to congratulate him for the new position and to discuss their upcoming bilateral work, according to Ahmed Abou Zaid, the ministry’s spokesperson.

Shoukry said that he is looking forward to working with Tillerson in the next phase to document and promote Egyptian-American relations in a way that reflects its own specificity and strategy, as well as the interests of the Egyptian and American people.

Meanwhile, Tillerson said that he is looking forward to meeting with Shoukry in Washington soon, in order to consult and discuss ways of enhancing relations between the two countries and also to coordinate and exchange views on a number of regional issues that concern the two countries.

Tillerson mentioned that the US is adamant to listen to Egypt’s views regarding regional issues.

Abou Zaid noted that the coming days and weeks will witness more communication between Egypt and the US to address all aspects of the relationship between them, explaining that this will take place under the supervision of the two countries’ presidents, Abdel Fattah Al-Sisi and Donald Trump.

This will reflect the history and depth of Egyptian-American relations, and common interests in promoting stability and peace in the Middle East, he concluded.

The call came as a way of strengthening relations between both countries. Tillerson was appointed to his position in early February, only a number of days after the inauguration of Trump as the US president.

Three days after Trump’s inauguration, he called Al-Sisi to enhance their bilateral relations. Al-Sisi was the first to congratulate Trump on 9 November when the results of the elections came out. Egypt and the US are witnessing good relations, as both administrations share a common vision regarding political Islam and terrorism.

Both countries’ relations improved after tensions over the past few years, particularly after the ouster of former president Mohamed Morsi by the armed forces in 2013. Former US president Barack Obama depicted this forced ouster as a military coup. The US cut aid as a result, but had to restore it in 2015 because of the rise of threats by the Islamic State (IS).