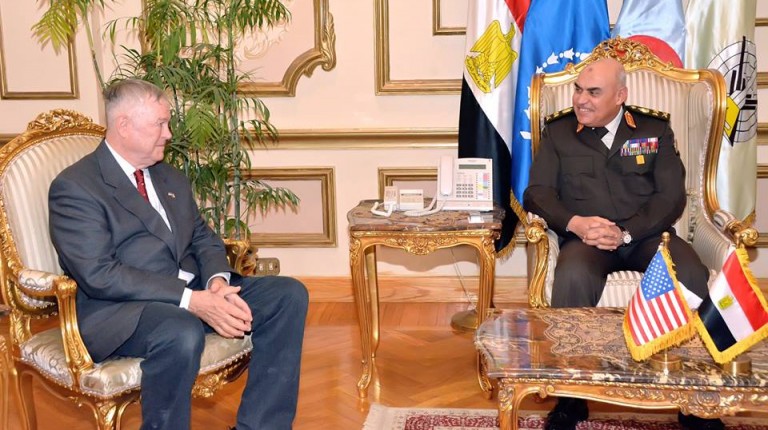 President Abdel Fattah Al-Sisi on Sunday met with a US Congress delegation, headed by senator Dana Rohrabacher, that is currently on an official visit to Egypt. In the presence of foreign minister Sameh Shoukry, Al-Sisi welcomed the delegation’s efforts in regard to the strategic relationship between Egypt and the United States and discussed with them Egypt’s efforts in fighting terrorism.

The president further stressed Egypt’s commitment to international efforts to stop the financing and supply of militant groups. Furthermore, he emphasised his country’s commitment to finding a lasting solution to the conflict between Israel and Palestine.

Minister of Defense Sedki Sobhi too met with the US Congress delegation, discussing with them developments in the Middle East and efforts exerted to fight terrorism.

“Defense minister Sedki Sobhi emphasised his pride of the strong relations that unite the two countries’ armed forces, which have extended for decades and are present in the military partnership, cooperation, training, and work due to the confrontation of challenges that target the security and stability of the Middle East region,” the statement read.

On their return, the US Congress delegation expressed their pride in what is being achieved by the Egyptian armed forces in combating terrorism and extremism to achieve stability in the Middle East, asserting their country’s interest in supporting partnerships in all fields.

On Saturday, the US Congress delegation paid a visit to the Cairo-based Coptic Cathedral Church, where they met with Pope Tawadros II of Alexandria. They also inspected the St. Peter and St Paul’s Church that witnessed a deadly attack in December 2016 and led to the death of 29 people, state-run media outlets reported.

The meeting discussed bilateral relations with the United States and ways to enhance cooperation between both countries. This is the second recent visit of a US Congress delegation to Egypt.

Earlier in June 2016, a delegation from the US Congress arrived in Cairo to meet with President Abdel Fattah Al-Sisi. The delegation was also led by Dana Rohrabacher, who is the chairperson of the Europe, Eurasia, and Emerging Threats subcommittee of the US House of Representatives.

Several US Congress members have visited Egypt in 2016 and also met with President Al-Sisi and other senior officials.