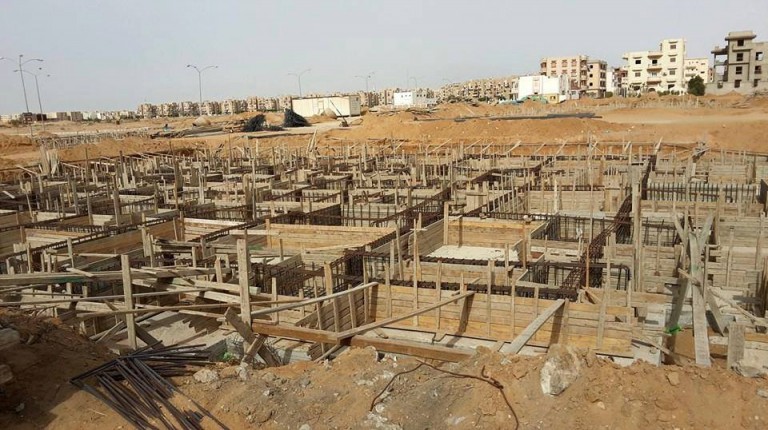 Ibrahim Tantawi, head of Middle Northern Coast Development and Construction Authority, said that the authority is working on the construction of 9,300 units and 886 shops at a cost of EGP 1.5bn within the first phase of the social housing project for low-income families.

He added, in an interview with Daily News Egypt, that the authority has delivered 2,972 ​​units and 477 shops to the Ministry of Housing, Utilities, and Urban Communities. There are also 6,342 units and 409 shops under construction in five governorates.

Tantawi explained that the authority will complete the construction of the housing units in June, in addition to the linkage of internal facility networks of sanitation, electricity, telecommunications, and drinking water with the general network.

He pointed out that the authority delivers its units to the Ministry of Housing in several phases within the Central Agency for Construction’s share of the social housing project, amounting to 42,000 units in 25 governorates, at a cost of about EGP 7bn.

The Middle Northern Coast Development and Construction Authority is affiliated with the Central Agency for Construction, and it implements the Ministry of Housing, Utilities, and Urban Communities’ projects in eight governorates, including Alexandria, Damietta, Beheira, Kafr Al-Sheikh, Daqahleya, Sharqeya, Gharbeya, and Menoufiya. This authority was established in 1987, after the split of the Northern Coast Development Authority into the middle and west northern authorities.

Tantawi added that the authority took over the responsibility for the establishment of a number of roads, at a cost of EGP 2bn in Kafr Al-Sheikh, Menoufiya, and Alexandria governorates.

He continued to add that the Egyptian Contracting Company will complete the establishment of the first phase of “Abou El-Rous-Metoubes-Fuwwah” road next December at a total cost of EGP 1.075bn.

He explained that the new road is designed to link the international coastal road and Kafr Al-Sheikh and Beheira governorates as well as the new industrial zone in Metoubes to serve the new reclaimed and agricultural areas.

Tantawi pointed out that the new road will be 31 km long, of which the first phase would be 15.3 km long and will be implemented by the Egyptian Contracting Company at a cost of EGP 500m. The same company won the second-phase tender to build the remaining 16 km worth EGP 665m, scheduled to be completed by the first quarter of 2019.

He added that the cost of the second phase increased because of the implementation of five bridges over the road and the payment of compensations to the owners of agricultural lands located at the road.

Tantawi added that the General Nile Company for Roads and Bridges took over the construction of the “Shibin Al-Kom-Tamlay” road in Menoufiya, at a cost of EGP 501m to connect Shibin Al-Kom with Al Sadat road.

He added that the company will complete the implementation of the project over the next year, pointing out that the cost of the project includes compensations for the owners of about 120 acres in the road’s axis.

Tantawi said that the Contracting Company received the land allocated to the building of the Borg El-Arab Airport road, which aims to connect the airport road with the Cairo-Alexandria Desert Road at a cost of EGP 298m.

Tantawi stated that the path of the project was amended with the approval of the Ministry of Agriculture due to the presence of connections to networks and facilities at the proposed site, adding that the new location was determined in January.

He went on to explain that the road is divided into two sectors. The first part—which does not include areas that require expropriation—has been initiated. Tantawi noted that there are now negotiations to determine the money needed for compensating landowners in the second sector. He said that the road will be completed within three years.

He added that the Borg El-Arab Airport road extends over 16 km and that the Egyptian Contracting Company won the tender after competing with Arab Contractors, Hassan Allam, Misr Concrete Development, and General Nile company for Roads and Bridges.

He explained that the road projects implemented by the authority across governorates often face the problem of expropriation as they extend through agricultural lands and this requires the construction of a larger number of bridges to avoid canals.

He pointed out that the construction of these roads in the aforementioned governorates will help connect the cities located in the Delta region with the north east coast by facilitating traffic. This will effectively increase internal trade and population movement between governorates.

Investments of the authority include an urgent plant to establish 95 kms of internal roads in governorates at a total cost of EGP 292m.

He added that the authority completed the establishment of the industrial-zone road at a cost of EGP 47m in Wadi El-Natrun and Beheira, which extends over 16 kms from the desert road.

Moreover, Tantawi said that the authority called upon the government to secure EGP 105m to finish the development of the first and second phases of the Lake Borollos development plan to clear about 245 feddans of the 3,308 allocated for both phases.

He added that the Arab Contractors Company implemented the project, noting that EGP 200m were spent to clear 1,808 feddans in the first phase, leaving 145 feddans left, in addition to 1,500 feddans in the second phase, with only 100 feddans left. He pointed out that the dredging output was collected on an area of 230 feddans.

He explained that the Egyptian cabinet requested a comprehensive vision to develop Lake Borollos in collaboration with the ministries of housing, irrigation, and agriculture, and take advantage of fisheries.

He pointed out that the development plan will include resolving the problem of the drainage canals that pour wastes into the lake; hence, clay would re-accumulate after clearing the lake.

He added that the total area of ​​the lake is 110,000 feddans, which is being cleared because of the problems suffered by fishermen, including low water levels. A low water level results in a lack of fish, effectively halting fishing.

He said that the authority is also implementing several projects for the benefit of the governorate of Alexandria at a cost of EGP 157m, including the regular maintenance and development of the city’s corniche, the expansion of the Cleopatra tunnel, the construction of several pedestrians bridges, and the construction of eight buildings in El-Max that will include 160 housing units.

The authority is one of the subsidiaries of the Central Agency for Reconstruction, which invested a total of EGP 14.6bn across several subsidiaries. Those investments cover roads, social housing, and service projects in Giza, Sinai, and Upper Egypt.