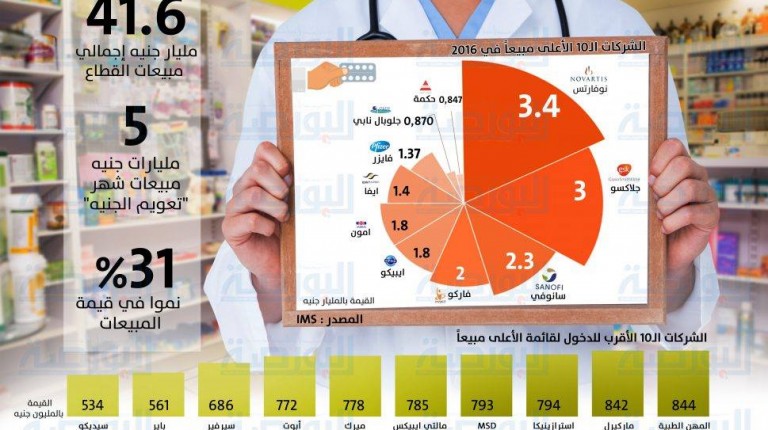 A report issued by IMS Health, an information technology company, stated that pharmaceutical companies’ sales—excluding tenders—exceeded EGP 13bn in the fourth quarter of 2016, which saw many calls from companies to raise prices to counter the hike in production costs, following the Central Bank of Egypt’s (CBE) decision to float the pound, leading to the national currency’s depreciation from EGP8.88 against the US dollar to EGP18.

The report pointed out that when the flotation decision was introduced in November, companies achieved sales of EGP 5bn—equivalent to 12% of 2015 total sales—up from EGP 3.8bn in October 2016, while December saw sales of EGP 4.3bn.

The growth rates achieved by the pharmaceutical sector in 2016 are considered to be the highest in 10 years, with growth exceeding 30%, compared to rates between 12% and 15% in previous years.

The year 2016 also saw the biggest debates so far between the Ministry of Health and Population and pharmaceutical companies about prices. Many factories called for price hikes, while the minister refused these calls. However, eventually, the ministry gave in and agreed to raise prices twice, in May 2016 and February 2017.

A source at the Pharmaceuticals, Cosmetics, and Appliances Chamber of the Federation of Egyptian Industries (FEI) said that the cabinet decision to increase the prices of medications that are below EGP 30 up by 20% in May drove the sales surge in 2016.

He told Daily News Egypt that the growth rates achieved in sales do not signal a significant increase in companies’ profits, which have been suffering losses for years due to selling at lower prices compared to their costs.

He added that the first decision to move the prices saved the companies from making huge losses, which could have driven some of them to shut down following the difficulties they faced in 2016, starting with a major shortage in US dollars, depreciation in the value of the pound on the black market due to the flotation of exchange rate, exchange rates surging to EGP 18 against the US dollar, and the rising cost of production input.

The sources pointed out that the decision in May helped companies to continue their business with lower losses. “But the flotation in November eliminated the positive effects, which meant it was necessary to raise prices again,” the source said.

Moreover, he added that an increase in sales in November and December do not mean that companies were not impacted by the flotation. “Fourth quarter financial results are usually higher compared to other quarters,” he said, noting that the impact of flotation will appear in the first quarter of 2017, as companies do not rely on immediate production and sales, but on the inventory they have in stock.

The source expected the sector sales to rise to EGP 50bn in 2017, following an increase of 15% of local medication and foreign medications by 30-50%.

The sources suggested that if only ten major companies continue dominating 43% of sales, foreign companies will achieve higher profits and public companies will suffer more losses.

According to a report by IMS, 20 companies—local and foreign—account for 62% of the sector sales, with a volume of EGP 26.1bn.

GNP and Hikma Pharmaceuticals maintained their rankings with sales of EGP 870m and EGP 847m respectively. Medical Union Pharmaceuticals and Marcyrl Pharmaceutical Industries are likely to compete in 2017, especially as sales of the four companies are very close to each other.

The report showed that foreign companies are still holding the largest market share compared to local private companies and public sector companies, with a share of 41% and sales of EGP 17.1bn.

Sources at foreign companies stated that sales of multinational companies are usually higher than those of their domestic counterparts as their prices are higher due to the fact that they provide mostly innovative products and treatment of incurable diseases.

The sources added that foreign companies have not achieved high profits last year despite the increase in sales volume, due to the exchange rate and the large increase in production costs.

The sources said that a number of multinational companies have achieved high sales in Egyptian pounds, but actually made losses due to currency differences between the Egyptian pound and the US dollar.

They noted that some companies made over EGP 1bn in 2015. With a US dollar price of less than EGP 8, this indicates that they made around $125m. Sales of these companies increased by 30% to reach EGP 1.3bn; but with the greenback changing hands at EGP 18, their sales in dollars fell to $72m. “Companies, in fact, lost sales worth $53m in 2016,” the sources said, adding that the growth in sales of Egyptian pounds not equaling a growth in the sales of US dollar is something that needs to be addressed.

Agreement on new medicine prices to be completed within 10 days: Prime Minister