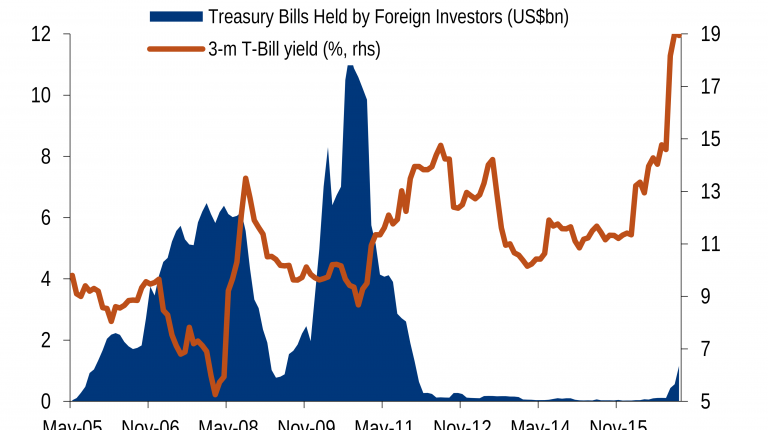 With the trade in Egyptian Treasury bills (T-bills) gaining ground, the witnessed drop in T-bill yields at auctions is an indication of the increasing foreign investor participation and is providing support to the USD/EGP trade with a better tone, according to Bank of America Merrill Lynch’s February insight report.

The report cites the unofficial announcement that the Central Bank of Egypt (CBE) cleared the backlog of investors seeking to repatriate funds, which was the main driver behind abolishing a source of downside risk near term, adding that the CBE continues to accumulate foreign currency reserves, and the 2003 devaluation episode suggests the non-oil trade deficit could narrow because of increased competitiveness.

The CBE said, in a press statement last week, that foreign investments in T-Bills amounted to almost EGP 11.5bn in January, excluding the value of the consumed bills.

Furthermore, the completion of the International Monetary Fund’s (IMF) first review in February/March could act as an incentive, dependent on whether the fiscal targets within the economic reform programme would be reviewed, which could ease fiscal reform, in addition to the slippage risk in light of the increasing inflation and in run-up to the presidential election mid-2018, according to the report.

The Central Agency for Public Mobilization and Statistics (CAPMAS) has announced earlier this week the annual rate of inflation hiked to 29.6% in January compared to January 2016. While the month to month inflation rate registered at 4.3%.

The relatively flat T-bill curve shape and the external funding profile implied by the IMF programme—fully funded for the first year but much tighter afterwards—argue for short-dated T-bill exposure.

Moreover, the report states that CBE data suggest that foreign holdings of T-bills increased to $1.2bn in January, from $0.1bn prior to the November devaluation. Previously the recorded peak in foreign holdings was $11.9bn in October 2010, before the 2011 revolution, which represented 23% of the total T-bill stock.

Average T-bill yields for the 6-month and 12-month maturities in recent auctions have decreased by 240 basis points (bps) and 280bps to reach a flat 17.7%. The value of the USD to the EGP has gone down, reaching 17.7, after nearly breaching EGP 20 per US dollar in December, said the report.

“We suspect the clearing of the backlog of investors relates to portfolio investors in the equity and bond market, and not to corporate flows,” said the report, adding that the backlog of corporate foreign exchange (FX) demand is more difficult to assess and depends on corporate operations and the prevailing exchange rate. Thus, timing of such a demand could be drawn out.

Consequently this would add to Egypt’s external funding needs. If the assumed backlog stands at $8bn, at least 40 days will be needed with the pre-2011 $0.2bn FX interbank market volume. The report adds that the use of the CBE repatriation fund mechanism by foreign investors could indirectly hold back volume in the FX interbank market.

The CBE guards these foreign currency inflows in order to prevent them from being used for balance of payments (BOP) purposes and help guarantee convertibility at exit. CBE deposits not included in official reserve assets registered at $1.3bn in January. However, these deposits are partially injected into the domestic banking sector, which may support the FX liquidity of domestic banks.

The continued accumulation of CBE reserve assets will act as a buffer, since past reversals in T-bill flows have been pronounced and sharp in response to shocks. Net international reserves (NIRs) stood at $26.3bn in January, from $17.5bn in June 2016, and after repaying $0.75bn to the Paris Club, $0.25bn to Libya, and outstanding obligations to Italian oil company Eni and other foreign oil and gas companies operating in Egypt.

However, while T-bill exposure appears to be a consensus trade—as during the second and third year of the IMF programme Egypt will face difficulties in external funding and a financing gap of about $35bn during the three years of the IMF programme—the margin for error or room to withstand major portfolio outflows is small, according to an IMF Egypt report.

The launch of the initial public offering privatisation programme, with a target of $10bn over the next 3-5 years, will have a positive impact.

The report mentioned that according to the 2003 devaluation, it is suggested that the trade deficit could narrow on increased competitiveness. After the 2003 devaluation, non-oil exports sustained a growth of 15% year over year in 2004. It was led by exports of finished commodities, which represented about 50% of total exports in the fiscal year (FY) 2016. However, overall import contraction was relatively short-lived in 2004, but it has a prominent effect on durable goods. Consumer goods, investment goods, and intermediate goods represented 25% of total imports in FY 2016.

The report states that the completion of the first IMF review in February/March could act as a positive catalyst. “We expect a positive review based on end-of-December targets, which should unlock US$1.25bn in IMF financing. The key aspect of the review is whether fiscal targets would be reviewed in light of the weaker-than-anticipated USD/EGP exchange rate—EGP 12-14 per US dollar is implicitly assumed in the program. This could, in our view, ease reform slippage risk,” said the report.

Furthermore, Egypt has no major reforms to implement until June 2017, and the next IMF review would be completed in November. Yet, Egypt faces a presidential election in mid-2018, and it is expected that President Al-Sisi is set to run for a second term. In case inflation has not significantly reduced, or there is a rising of social tensions, the Egyptian reform programme slippage risk will increase, according to the report.

This is particularly the case on the fiscal front, as the next round of reforms from July 2017 onwards is likely to be inflationary and includes an increase in the value added tax (VAT) rate by 1% to 14% and a further hike in administered energy prices as a result of reduction in subsides.

The report concludes that the relatively flat T-bill curve shape and the external funding profile implied by the IMF programme argue for short-dated T-bill exposure. Furthermore, the CBE is unlikely to tighten monetary policy further after its pre-emptive tightening. Disinflation is likely to be gradually helped by the reduction in CBE deficit monetisation operations, but negative real interest rates are likely to be needed to put government debt in a downward path.

Egypt’s Bank Profits To Be Flat In 2013 – C.Bank Official

Ministry of Finance sells EGP 124bn worth of T-bills, bonds