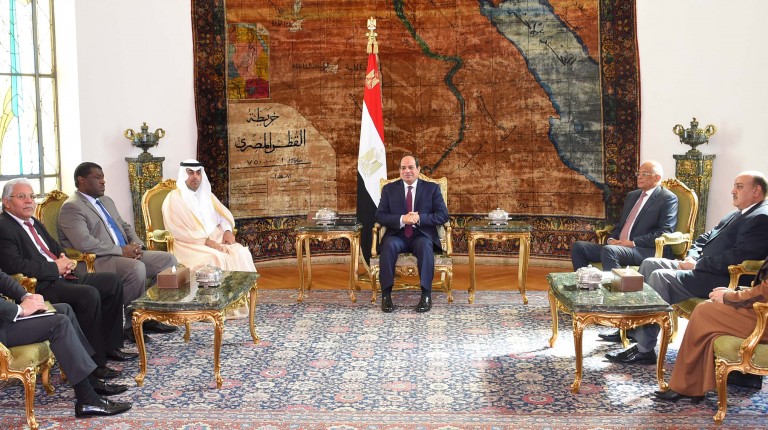 Egyptian President Abdel Fattah Al-Sisi met on Tuesday with Arab parliament speaker Mishaal bin Fahm Al-Salami and board members of parliament. Their discussion mainly revolved around the role of the Arab parliament in confronting the challenges Arab nations face, according to a statement by presidency spokesperson Alaa Youssef.

At the beginning of the meeting, Al-Salami presented Al-Sisi with the insignia of the Arab Parliament, praising Egypt’s—and especially the Egyptian parliament’s—support of the Arab parliament.

During the meeting, officials reviewed a document that was issued during the second annual conference of the Arab parliament, which was held and attended by Arab leaders and high officials at the headquarters of the Arab League in Cairo on 11 February.

The aforementioned document included discussions over different political, economical, and social issues that concern the Arab people. It is scheduled to be submitted at the upcoming Arab League summit, scheduled to take place in Jordan.

Among the topics of the document was fighting terrorism; condemning different terrorist attacks that had been carried out against the Egyptian people, the armed forces, and the police; and calling on all concerned parties as well as on regional and international institutions to take the necessary steps against terrorism and the sources of funding of militant groups.

Moreover, during the meeting, Al-Sisi congratulated Al-Salami for winning the trust of the members of the Arab parliament, who elected him as their head, also praising the role of the parliament in promoting and developing a joint Arab cooperation.

The president also praised the founding of the Arab parliament to be the voice of the Arab nations and applauded it for being a platform to express their hopes and aspirations, stating that it was needed to unite Arab efforts and stances to confront the current challenges.

Officials further discussed challenges in different Arab countries, with Al-Sisi asserting that Egypt will continue to stand in solidarity with these countries, saying that their national security is also part of Egypt’s. Al-Sisi concluded his statement by highlighting the importance of helping Arab countries in their crises and restoring stability.