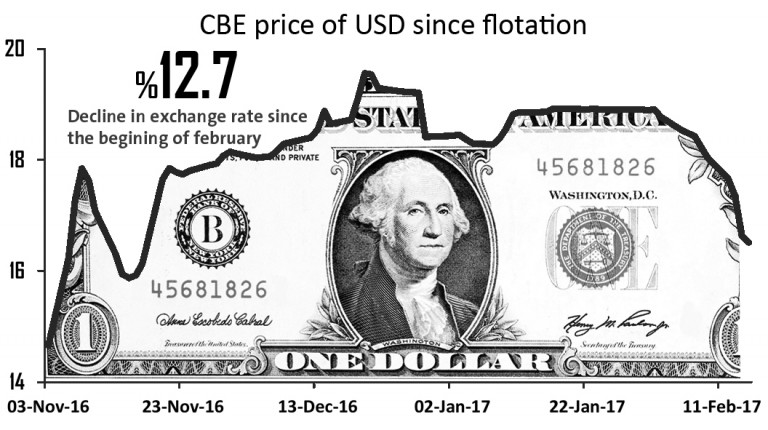 Is the improvement of the price of the Egyptian pound against the US dollar owed to the recovery of the real economy? This question is being posed by many people during the significant decline of the dollar against the pound, which reached 12% since the beginning of February.

Daily News Egypt is seeking, through this report, to answer this question with an eye on the real reasons for the improvement of the pound, and whether the increased value of the pound will reduce prices—an issue to many Egyptians since the pound’s flotation—or not.

Economists are advising to not buy dollars in the coming period, because they expect its further decline in the short term, before it will eventually rise again in the medium and long term.

What are the causes of the increase of the price of the pound against the dollar?

The decline in the price of the dollar is the beginning of recovery, and we are witnessing selling pressure on the dollar and an increase of remittances from those who work abroad, says Mohamed El-Etriby, chairperson of Banque Misr.

El-Etriby said that the remarkable rise in the value of the pound against the dollar is considered the beginning of the recovery of the indicators of the Egyptian economy and a preliminary result of the economic reform programme, which was applied by Egypt four months ago.

We asked El-Etriby to comment on the improvement of the value of the pound that happened despite the lack of improvement in the real indicators of the economy and the increase in inflation rates.

“What happened is the beginning, and the trade balance has improved by roughly $5bn. Exports have increased and imports started to decline,” El-Etriby commented.

El-Etriby said that there are many reasons behind the improvement of the value of the pound, which is represented by the sale of dollars by citizens in a number of banks and exchange firms during the past few days; in addition to foreigners’ buying pressure on the government treasury bills, which jumped to $2bn since the flotation of the pound, along with roughly $1bn of foreigners’ investments in the stock market.

El-Etriby said that the remittances from Egyptians abroad are increasing within the official channels, besides the disappearance of the informal market since the flotation of the pound. Egypt also obtained the offered dollar certificate proceeds that are estimated at $4bn. All of the above are reasons for the recovery of the pound and the decline of the dollar.

An official at the Central Bank of Egypt (CBE) said  banks’ proceeds from foreign exchange registered $635m on Monday; it increased by $12.3bn since November till now, which reflected on the foreign exchange liquidity size in the banking system.

The source said, in statements to the Middle East News Agency, that the disposal rates for the dollar by its holders are growing day by day and surpassed $550m on Thursday; most of the sellers being from Upper Egyptian provinces.

The source pointed out that the price of the dollar has significantly dropped since the beginning of last week due to the increase of supply and the decline of demand. He noted that a large portion of dollar liquidity from the informal sector to banks and the increase of the inflow of foreign investments through treasury bills contributed to the improvement in foreign exchange rates. 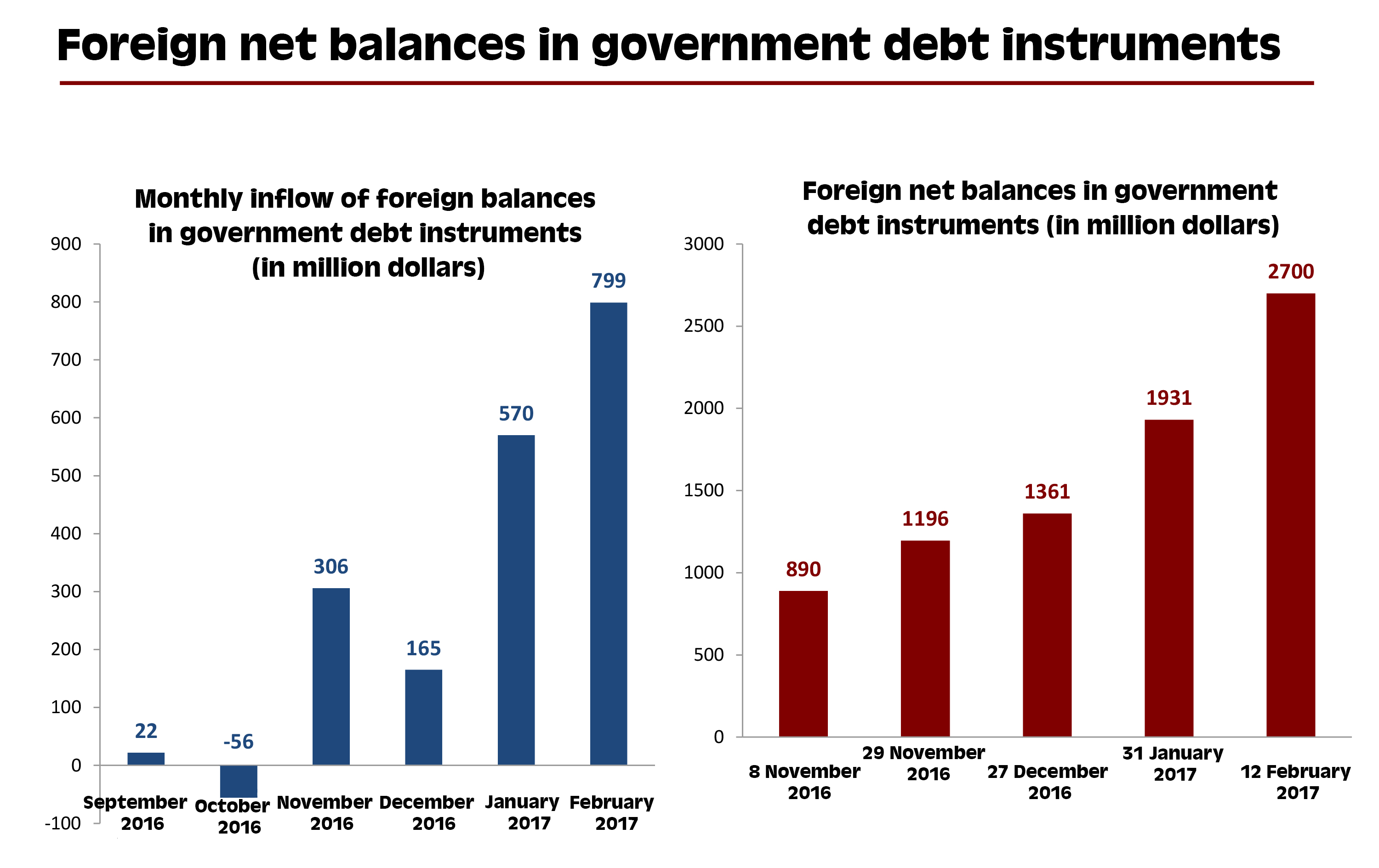 Will prices fall as a result of the decline of the dollar and improve the lives of citizens?

The inflation rate increase will raise the consumer price Index (CPI), issued by the CBE, for the third consecutive month after the economic reform measures taken by the government in the last five months—the flotation of the pound is on top of the reasons.

Mohamed Farid, chairperson and CEO at Dcode Economic and Financial Consulting, says that the significant decline of the dollar price does not reflect a real recovery of the economy’s productivity indicators, and he urged to wait for results of the reforms.

He expects the prices to decline by the same decline value as the dollar, so the decline of the dollar is not a result of an increase in the productivity capacities of the country—which means increasing the supply of goods—and therefore their prices will decline.

A price rise is often quick and follows a currency flotation, and reducing prices always takes a long time. Farid predicts that prices are to improve during 2018 if the implementation of the economic reform programme goes well.

Egypt designed the economic reform programme in cooperation with international financial institutions.  The programme aims to correct the path of the Egyptian economy, which had been slowing since January 2011, through legislative reforms, currency flotation, and reductions in fuel subsidies.

The Central Agency for Public Mobilization and Statistics (CAPMAS) said last week that annual consumer price inflation reached 29.6% in January, compared to 24.3% in December, driven by the significant rise in the rate of food and drink prices.

The government has taken a number of measures due to inflationary impacts over the past months, starting with the value-added tax (VAT) in mid-September.

The CBE also announced in November its decision to float the pound, giving the flexibility to banks operating in Egypt to price the purchase and sale of foreign exchange.

Hours later, the government announced an increase of petrol, diesel, fuel oil, kerosene, and LPG cylinder prices by rates ranging between 7.1% and 87.5%.

According to the expectations of the international financial institutions and investment banks operating in Egypt, these decisions will lead to a big jump in the prices of goods and services during the current fiscal year (FY).

According to the latest CAPMAS data, more than 25 million Egyptians lived below the poverty line in 2015. The Income, Expenditure, and Consumption Survey showed that the official poverty line rose from EGP 326 per month in FY 2012/2013 to EGP 482 per month in 2015.

This means that a family consisting of five members needed EGP 2,410 pounds per month in 2015—prior to the flotation and removal of subsidies on energy—in order to remain above the official poverty line.

This came at a time when the Egyptian economy witnessed a slowdown in growth during the first quarter of the current FY, compared to the previous FY, due to a lower growth in consumption rates, which is the main engine of the economy.

According to the head of the research department at Prime Holding, Abou Bakr Imam, the slowdown in growth rates is due to the inflation. He pointed out that inflation decreased the purchasing power of people because of the increased prices, a rise that did not meet an increase in income levels of individuals, who are mostly private or public sector employees.

Improvement in the value of the pound is unjustified for its reliance on hot assets rather than productive investment: Tawfik

Hani Tawfik, former director of the Egyptian Private Equity Association, says that targeting a lower price of the US dollar is a big mistake; warning of the current reliance of the CBE on hot assets to strengthen the pound.

Hot assets are considered foreigners’ investments in the Egyptian Stock Exchange (EGX) and the market for government debt, which last for between 6 months and a year.

Tawfik confirms that increasing the price of the pound has to happen through the increased dollar flows of direct foreign investment, tourism, exports, and the Suez Canal.  All those channels have not yet seen improvement, which means that the improvement in the value of the pound is not built on a solid foundation.

Mohamed Farid, says that the high price of the dollar is the result of the pound flotation—after it had been fixed over the past decades—and it was natural to jump in an exaggerated manner.

He added that the current price of the dollar surpasses the reality of supply and demand in the market, as a result of a state of unbalance and lack of rationality, which hit the market after the flotation.

The stability of the exchange rate market, overcoming the lack of balance, and receiving new dollar inflows will lead to a fix of the dollar scale, according to Farid.

Egypt depends heavily on imports to secure its basic needs of food and fuel, which exceed its exports, tourism, and foreign direct investment that bring hard currency, goods, and services.