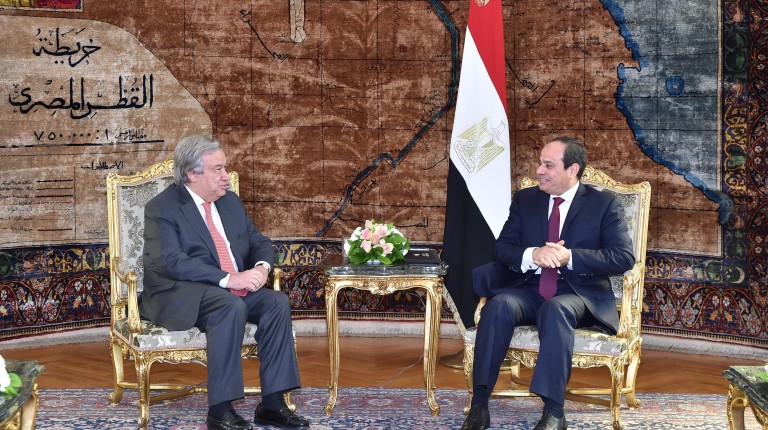 “Egypt has always placed great emphasis on the UN role in enhancing multilateral international cooperation, demonstrated by Egypt’s active contribution in UN activities, especially in light of Egypt’s current membership of the UN Security Council and its major contributions to peacekeeping operations,” Al-Sisi said according to a presidential statement.

Al-Sisi stressed the importance of exerting more efforts to revive the peace process between the Palestinians and Israelis and affirmed that reaching a just and permanent solution to the Palestinian issue will deliver a new reality in the region and contribute to restoring stability.

For his part, Guterres said that “everything must be done to preserve the two-state solution for resolving the crisis between Israelis and Palestinians, as there is no Plan B.”

According to UN’s reporter Dianne Penn, Guterres said in a joint press conference later with Minister of Foreign Affairs Sameh Shoukry, “First of all, with a complete agreement that there is no Plan B to the situation between Palestinians and Israelis but a two-state solution and that everything must be done to preserve that possibility.  Second, a strong commitment to make sure that the fight against terrorism is pursued with total determination.”

The meeting reviewed a number of regional challenges, including Syria, Libya, Iraq, and Yemen. On Syria, Guterres noted that the UN is keen on promoting the political process among the Syrian parties within the Geneva talks and reaching a political settlement that ends the plight of the Syrian people, paving the way for reconstruction.

On Iraq, he stressed the need to enhance national reconciliation efforts. He looked forward to reaching political settlements in Yemen and Libya this year so as to restore stability, underlined the UN’s supports of all regional and international efforts to this end, and commended in particular Egypt’s key role in resolving Libya’s crisis.

Al-Sisi referred to Egypt’s role in this context to bring the Libyan factions closer and affirmed that Egypt is keen on not interfering in other countries’ affairs. He also said that the Egyptian administration aims to preserve the unity and territorial integrity of Libya, protecting its resources and supporting its national institutions so as to spread control over its territories and restore stability. The president reviewed contacts that took place in Cairo between the Libyan factions to reach an understanding on pending issues.

The meeting tackled ways to enhance cooperation between Egypt and the UN at various levels and on different issues. This is in addition to promoting international efforts to counter terrorism and halt the flow of funds, weapons, and fighters to terrorist groups.

Guterres noted the fact that the countries in the region receiving refugees have had less international support with regards to the refugees themselves and their living conditions and that such host communities share with refugees resources that are sometimes scarce.

Guterres further “commended Egypt’s role as a chief contributor to the UN peacekeeping operations. He noted that attending the last AU Summit in Addis Ababa affirms the UN’s attention to solve the continent’s problems. He added that visiting the Middle East first since assuming his post aims at crystallising a vision to overcome regional challenges and reach political settlements,” the Egyptian presidency said.

Guterres delivered a lecture at Cairo University, where he focused on the importance of young people in addressing the challenges confronting the contemporary world, stressing upon the impacts of climate change.