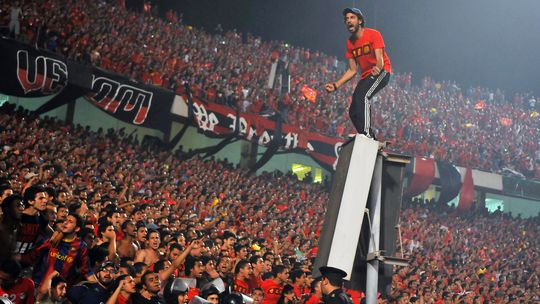 The Qasr Al-Nil Misdemeanours Court postponed on Saturday the prosecution appeal against the acquittal of 15 Ultras Ahlawy members—affiliated to Cairo’s Al-Ahly Sporting Club and the accused in the Al-Ahly handball match case—to 4 March, local media reported.

This was the first appeal session against the member’s acquittal. The Ahlawy members received an acquittal in mid-November, but the prosecution appealed it.

They were arrested on 23 September after Al-Ahly SC headquarters was stormed amid demands to attend a handball match between Al-Gezirah Club and Al-Ahly.

The members faced charges of inciting riots, chaos, and attempting to break into Al-Ahly SC headquarters.

Last week, Cairo West Prosecution ordered the imprisonment of eight Ultras Ahlawy members on charges of belonging to outlawed groups and promoting the groups’ purposes through verbal and written means, possessing unlicensed fireworks, and illegal publications against the state and the Ministry of Interior.

The members were also accused of inciting unlicensed protests, as their arrest happened during the period of the anniversary of the Port Said Stadium massacre, which took place on 1 February 2012 and led to the death of 74 Al-Ahly fans.

Over the past three years, a number of Ultras members were arrested on accusations of inciting riots and bullying. The arrests usually happen following disputes with security forces present around the club.

Ultras members are commonly portrayed in the media as “thugs” that consider the state and the Ministry of Interior as enemies.