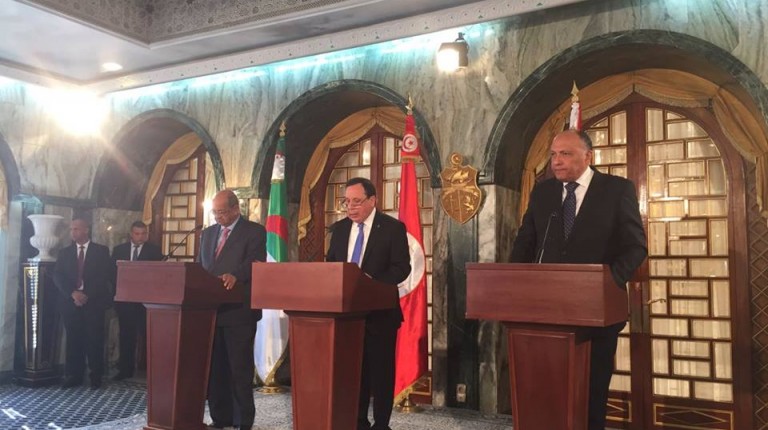 Egypt’s minister of foreign affairs Sameh Shoukry met with Tunisian president Beji Caid Essebsi and Algeria’s foreign affairs minister Ramtane Lamamra on Monday to continue discussions over Libya’s situation and further steps to activate the Tunisian initiative to resolve the Libyan crisis by the cooperation and coordination of the three countries.

A joint statement is scheduled to be released to declare the results agreed upon in the meeting. This meeting came following the conclusion of the ministerial meeting in Tunisia between the Egyptian, Tunisian, and Algerian foreign affairs ministers.

The meeting with Essebsi came in response to an initiative he raised to find a possible solution for the Libyan crisis.

Shoukry praised the Tunisian president for his efforts to find an escape route from the current political stalemate, stressing that Egypt, Tunisia, and Algeria are the most affected by Libya’s ongoing instability. He also stressed that there is an alternative to the comprehensive political solution in Libya and confirmed the rejection of any foreign interference, as well as the commitment to the restoration of stability in Libya and fighting terrorism.

The minister also reviewed the latest updates of Egypt’s efforts regarding the Libyan situation, referring to the latest meetings held in Cairo with Libyan figures, and explained that the outcomes of this meeting showed a growing consensus among Libyan parties on a number of national issues, as well as in the pending issues.

Similarly, on Monday, Libya’s Armed Forces’ chief of staff, Mahmoud Hegazy, met with the UN envoy to Libya, Martin Copler, who is currently visiting Egypt. The meeting came in the context of the combined Libyan-Egyptian efforts to achieve peace in Libya.

The meeting reviewed the development of the political arena in Libya following the recent steps undertaken by the Libyan National Committee assigned to achieve compatibility between all Libyan political factions.

Hegazy stressed that Egypt is assiduous to resolve Libya’s political crisis through achieving reconciliation based on the unity of Libyan territories. For his side, UN’s envoy to Libya expressed his pride of the exerted efforts from Egypt that support dialogue and the achievement of political compatibility in Libya. He further asserted on the necessity of the continuation of coordination to the international and regional efforts to get out of the paralysis in the political scene currently facing Libya.

Egypt has held several meetings with Libyan figures over the past week. In one of the recent ones with Libyan prime minister Fayez Al-Sarraj and Libyan general Khalifa Haftar, the officials agreed to hold parliamentary and presidential elections in Libya in February 2018, state-run media outlets reported.

Last month, Shoukry visited Tunisia and met with the Tunisian president and foreign affairs minister to review Egypt’s continuous effort in this regard.

Egypt has actively sought a solution to the Libyan turmoil over the past few months, which has increased over the past few years following the downfall of Muammar Gaddafi as militants have taken over several areas in Libya.