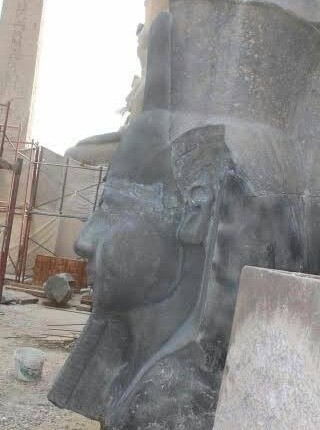 Aiming to inspect the restoration processes of one of King Ramses II statues that was destroyed in the fourth century AD, Dr. Khaled Al-Anani, the Egyptian Minister of Antiquities, and Irina Bokova, director-general of UNESCO, visited the city of Luxor along with Governor Mohammed Badr. The statue was destroyed as a result of a devastating earthquake that swept the country at that time.

Therefore, the idea of restoring and re-installing the statue came up and was approved by the Ministry of Antiquities and the Governor of Luxor, who supported the idea by providing the required materials for the restoration process. The work started in November 2016, and an Egyptian expert made the necessary studies for re-gathering the remaining parts of the statue.

According to the official page of the ministry, the statue is made of gray granite and weighs 65 tonnes and has a height of 10.8 metres. Waziri also added that the work will continue day and night in order to finish this huge project that will change the looks of Luxor temple forever.

From her side, Bokova expressed her admiration for what has been implemented by the hands of the experienced Egyptian workers who have previously worked in the restoration of many of the statues on the western bank of Luxor.

Last week, Al-Anani and Bokova reopened the fully restored Stoppelaëre house in Luxor. The house belonged to the deceased French archaeologist Alexandre Stoppelaëre, who worked for the Ministry of Antiquities during the 1950s. The house was rebuilt by the leading Egyptian architect Hassan Fathy. After the restoration efforts, the house will be turned into a training centre for locals who want to learn 3D technology and photography arts.

Shoukry’s call for solidarity does little to move Mexican commentators