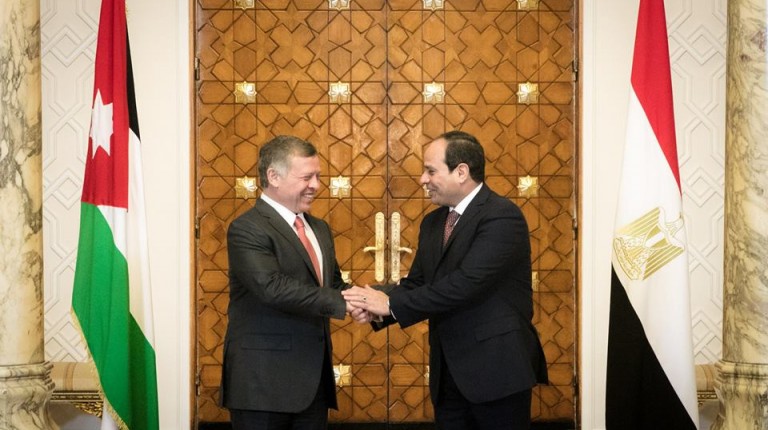 The visit will include discussions between the two heads of state for the sake of strengthening cooperation as well as tackling regional issues of common interest, namely the Palestinian-Israeli conflict and the upcoming Arab League summit that is to be held in Jordan in March.

On Sunday, the Egyptian presidency issued a statement to comment on recently published press reports suggesting that President Al-Sisi participated in a “secret summit” between Israeli Prime Minister Benjamin Netanyahu, former US secretary of state John Kerry, and Arab leaders. The report suggested that Netanyahu had rejected a proposal for renewed peace talks during the summit.

While not denying participation in the meeting, the presidency said that “Egypt spares no efforts to reach a just and permanent solution to the Palestinian issue, based on the two-state solution and the Palestinians’ right to establish an independent state along the June 4, 1967 borders with East Jerusalem as its capital, without any political outbidding.”

The report said that Kerry’s proposal was rejected by Netanyahu but was supported by the two Arab leaders. The proposal reportedly included the recognition of the Jewish state and the renewal of talks with the Palestinians, with support of the Arab countries.

In a follow-up report, Haaretz reported reactions from Israeli politicians who criticised Netanyahu’s “missed opportunity” for peace negotiations, given that he had initiated the summit in the first place.

This comes as the Egyptian presidency asserts that Egypt “exerts unceasing efforts to create a climate conducive to a permanent solution to the Palestinian issue based on the Arab national fundaments and on preserving the rights of the Palestinian people”.