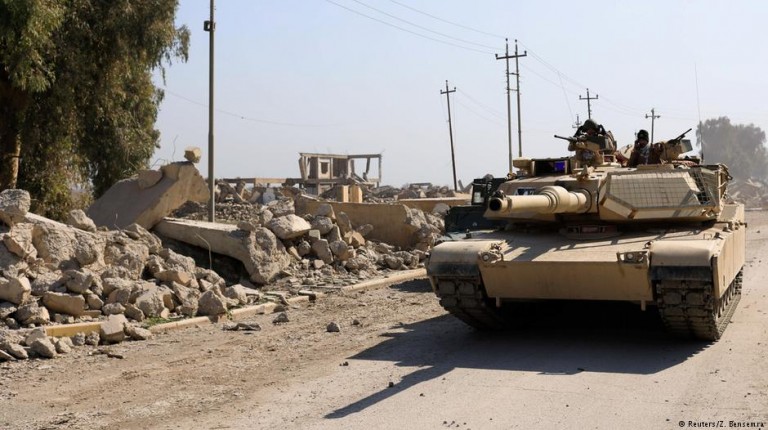 Iraqi troops have successfully taken the whole of Mosul airport back from so-called “Islamic State” (IS) terrorists, the army said on Friday. Their forces have also moved into the first neighborhood in the west of the city since IS overran Mosul in June 2014.

Lieutent General Sami al-Aridhi told the press that special forces had also taken over an army base that is considered key to the success of the offensive to recapture western Mosul and free the 750,000 citizens estimated to be trapped there.

“We have attacked and fully control Ghazlani base, we have also taken Tal al-Rayyan… and we’re attacking Al-Maamun neighborhood,” he said.

IS on the run

The multi-pronged assault on the strategic targets began earlier this week, backed by US airstrikes and coalition soldiers. After making significant advances in the eastern half of the city in recent weeks, the Iraqi military look poised to push the terrorists from their last stronghold in Iraq. If victorious, this would likely signal the beginning of the end for the so-called “caliphate” which the militants proclaimed in 2014 after taking over large parts of Iraq and Syria.

Fighting in the older western half of the Mosul is especially difficult, however, as its narrower streets make it nearly impossible to use armored vehicles and terrorists have been using small drones and suicide attacks to stop the Counter Terrorism Services (CTS) from advancing.

“There is a resistance there. The drones are particularly annoying today,” said al-Aridhi.

Under IS occupation, Iraq’s second city has been subjected to a number of war crimes such as forced sex trafficking, ethnic cleansing of Christians, and the destruction of ancient heritage sites such as the tomb of the Old Testament prophet Jonah.