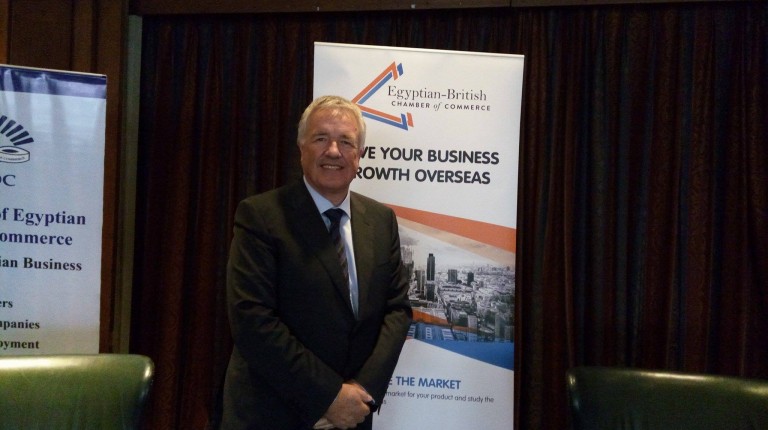 Britain is seeking to increase the volume of trade exchange and inject direct foreign investments over the upcoming period, according to Ian Gray, head of the Egyptian British Chamber of Commerce (EBCC).

The Egyptian government has undertaken some economic reforms recently, such as the pound flotation and reducing energy subsidies. What do you think of these decisions and their impact on British investors?

These economic measures have encouraged foreign investors in the Egyptian market and eliminated their fears of investing in it.

How did Britain see Egypt before the flotation decision?

British companies were in a state of anticipation due to what the market was going through with the currency price fluctuations, but after the economic decisions the government undertook at the end of last year, Egypt has become more attractive for direct foreign investment.

Do you expect British tourism to return to Egypt as the return of Russian tourism nears?

I hope May’s visit results in the return of British tourism to Sharm El-Sheikh after a halt of a year and a half since the downing of the Russian plane in October 2015.

What is your opinion about the government’s trend towards national projects over the past months?

The government’s announcement of launching several major national projects, such as the New Administrative Capital and the Suez Canal Economic Zone (SCZone), has enhanced investment opportunities.

What are the most attractive sectors for investment in Egypt?

Chemical and petrochemical industries, in addition to construction, which British companies seek to invest in over the upcoming period.

How do you see the SCZone project?

The project allows Egypt to increase its export opportunities due to its proximity to the ports of surrounding countries. Moreover, it is a suitable area for major projects.

In your opinion, what are the challenges facing Egypt over the upcoming period?

Population growth is the most prominent challenge for Egypt in the upcoming 30 years. The government’s efforts to establish the New Administrative Capital will contribute to solving the crisis, which is a burden on the economic reform agenda.

What are the main sectors Egypt is characterised by?

Egypt is distinct in the sectors of telecommunications and information technology. This is why Britain was not looking to invest in this sector over the upcoming period, but rather in chemical and petrochemical industries in addition to construction.

Do you expect the performance of the Egyptian economy to improve over the upcoming period?

I expect the Egyptian economy to improve by the end of 2017. I also expect the rates of foreign investment injection in Egypt to increase, especially after the flotation, which ensures a transfer of profits abroad without losses.

How will the improvement take place?

Egypt has a large number of graduates that must be helped in terms of establishing their small and medium enterprises (SMEs), which contribute to increasing GDP and enhancing economic development.

What is the volume of trade between Egypt and Britain?

It was estimated at GBP 1.16bn in 2015, with GBP 481m representing Egyptian exports to Britain, and GBP 682m representing imports.