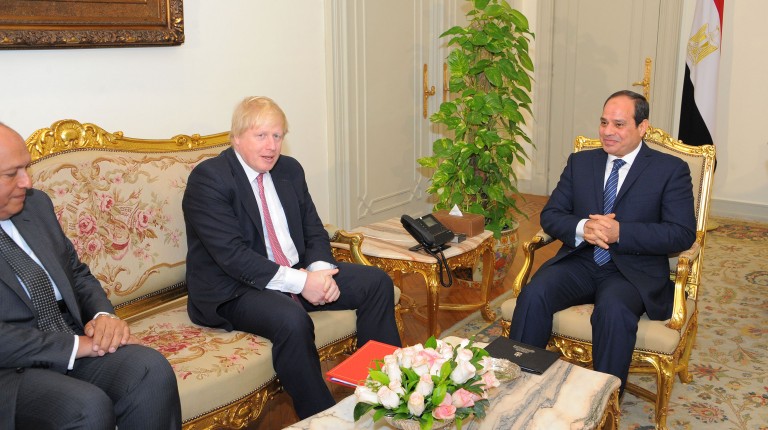 The United Kingdom (UK) decided it will fund Egyptian entrepreneurs with £1.1m over a period of three years, UK foreign secretary Boris Johnson declared in his meeting with President Abdel Fattah Al-Sisi on Saturday in Cairo.

During the meeting, both agreed on a loan worth $150m to Egypt to support the government’s economic reforms. About $18m will be dedicated to protect the most vulnerable group in Egyptian society from the reform’s consequences, such as price hikes.

Talking to Daily News Egypt, British ambassador to Egypt John Casson stated that Egypt is on the right road regarding the economic reform, which is a very necessary step. But it also faces some difficult steps, some of which put pressure on Egyptian families. The next few months are going to be very important to concentrate on the reform, he added.

These statements came during an event held in the British embassy in Cairo to celebrate the best entrepreneurial projects, which give young entrepreneurs the chance to connect with business figures.

This event was attended by Johnson, who gave an opening speech, asserting his visit aims at supporting Egypt. His visit is his first official one to Egypt after being appointed in July 2016 as British foreign minister.

Daily News Egypt spoke to a number of entrepreneurs who saw the event as a big opportunity to develop their businesses and help them forge more partnerships with other businesspeople.

During the event, Johnson listened to young entrepreneurs and their descriptions of their projects.

The UK initiative focused on providing economic assistance to Egypt to enhance the country’s economic reform. Also the UK initiative with entrepreneurs came as a support for the small projects in Egypt, which present social services. Previously in December, the embassy had announced a fund for entrepreneurs.

“Today is the first visit for British foreign minister, so it is an important day; and, of course, we have done meetings with Egypt’s president and its foreign affairs minister,” Casson said. He added that they also arranged an event for Egypt’s future, whose success depends on its entrepreneurs.

The ambassador asserted that the UK is keen on supporting Egypt’s economy, referring to the important economic cooperation Johnson declared in his meeting with Al-Sisi. Economic cooperation came on the forefront of their meeting, as additional British support was provided to Egypt along with the loan.

This meeting was attended by Egypt’s Minister of Foreign Affairs Sameh Shoukry and Casson.

Johnson stated that the support will include education, which will include the British Council’s signing of 70 new partnerships between British and Egyptian universities and the increase of English language teachers trained by the council.

Previously, there were 30 signed partnerships in 2016.

As for the loan, it will be submitted to the UK Department for International Development and to the Ministry of Investment and International Cooperation headed by Sahar Nasr.

Priti Patel, the UK secretary of state for International Development, said that the UK is enhancing its partnership with the Egyptian administration and that it will help in implementing a number of economic reforms in Egypt. She added that the loan is to support the stability, peace, and prosperity in all parts of Egypt.

Moreover, Johnson said that the UK will increase the Newton-Mosharafa Fund to reach EGP 50m. This fund promotes economic development and social welfare in Egypt, through the support of scientific research and innovation.

During the meeting, Al-Sisi confirmed that fighting terrorism requires a comprehensive international strategy, which should not only be limited to security and military aspects, but should also extend to change the terrorist’s ideology through education and to renew religious discourse.

He added that it also requires concerted efforts from the international community at all levels to deal with all terrorist groups in accordance with one standard aimed at halting funding and the supply of weapons and fighters to these groups.

On his side, Johnson referred to the strategic importance that characterises Egypt and its leadership role in the region. He stressed the need to strengthen the consultation between both countries to face challenges in the region and the world.

Johnson ensured the UK’s full support to Egypt in its efforts to fight terrorism, which represents a global threat. He also praised Egypt’s efforts to settle the existing crises in the Middle East, especially the Libyan crisis, in order to stabilise the climate necessary for economic and social development.

The officials also reviewed the latest updates on Egypt’s economic reform programme and the country’s current economic situation. The meeting further reviewed the current situation in Middle Eastern countries, especially in Syria and Yemen, as well as the efforts to revive peace. Al-Sisi concluded asserting the need to restore stability in the region.