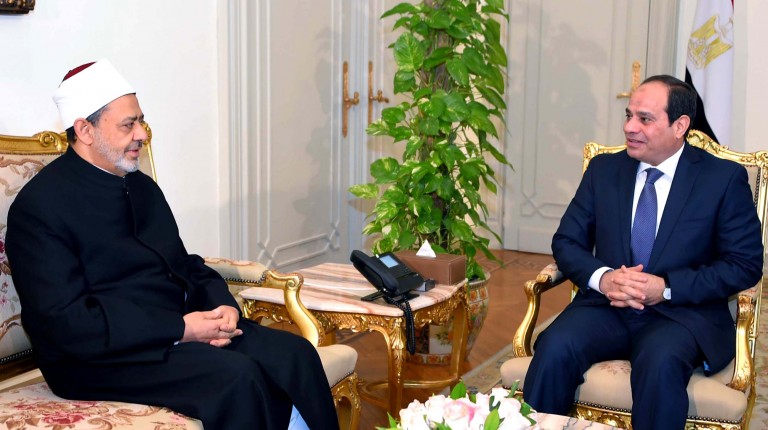 President Abdel Fattah Al-Sisi received the Grand Imam of Al-Azhar, Ahmed Al-Tayeb, in a meeting on Sunday, in which Al-Tayeb reviewed recent efforts for renewing religious discourse and to purify them from misconceptions, according to a statement from the presidency spokesperson.

During the meeting, Al-Tayeb presented ongoing preparations for the “freedom and citizenship” conference, which takes place in Cairo on 28 February and was organised by Al-Azhar. This conference aims at discussing citizenship and freedom, social and cultural issues, and Arab Islamic-Christian experiences in peaceful coexistence during the past centuries.

Head of Egypt’s Coptic Orthodox Church Pope Tawadros II, Patriarch of Saint Mark, and heads of the Eastern Churches, intellectuals, scholars, and delegations from about 50 countries will participate in the conference.

Moreover, the meeting also included discussing Al-Azhar’s role in promoting international dialogues among different religions, referring to a seminar that was arranged by Al-Azhar at the Vatican with the Pontifical Council to discuss interreligious dialogue. During this conference, ways to counter intolerance, violence, and extremism were addressed—along with discussions on the importance of respecting religion, secularism, and pluralism, aiming at highlighting common human values among people.

At the end of the meeting, Al-Sisi asserted that Al-Azhar is a beacon of moderate Islamic thinking, referring to its large responsibility to provide a real and civilised model of Islam to confront calls for extremism and terrorism.

He also encouraged the continued efforts by Al-Azhar in renewing religious discourse on both levels, internal and external, and to emphasise the values of progress, tolerance, and acceptance of others, especially in this current stage, as the country is facing the unprecedented challenge of rapidly growing terrorism.