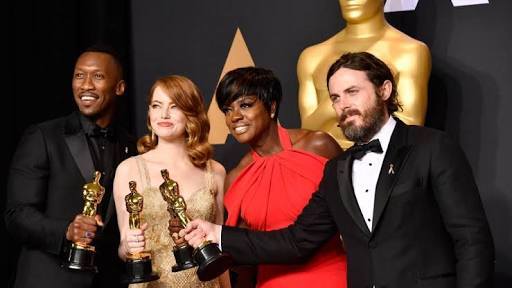 Each year, millions of people around the world gather to watch the Oscars. Although the ceremony was only broadcasted to a number of pay-TV channels, millions of Egyptians managed to watch it on various live-streaming links on the internet. The 89th Academy Awards witnessed moments of shock, embarrassment, and sarcasm.

This year, comedian Jimmy Kimmel was the Oscars host. In his opening monologue, which included a lot of political satire, Kimmel made fun of American president Donald Trump by saying, “we are more than two hours into the show, and Donald Trump hasn’t tweeted at us once. I’m starting to get worried about him.” So he decided to tweet him twice on stage by writing “Hey@realdonaldtrump u up?” and “#merylsayhi.” In other parts of his speech, he mocked Trump’s decisions to ban several Arabic countries’ Muslims to enter America.

Regarding the Oscars’ nominations and awards, many surveys were expecting Ryan Gosling to be awarded the golden statue for his leading role in La La Land, which was nominated for 14 awards, but Casey Affleck shattered those expectations by receiving the Oscar for his outstanding performance in Manchester by the Sea. The movie was also awarded the best original screenplay award. Emma Stone of La La Land received the “Best Actress in a Leading Role” Oscar. This comes after she was awarded the best actress award for the same role at the Golden Globes a few weeks ago.

On the other hand, Viola Davis was chosen as the “Best Actress in a Supporting Role” for the movie Fences, in which she played the role of an African-American working-class woman who struggles with her husband to raise their son. Similarly, Mahershala Ali won the “Best Actor in a Supporting Role” Oscar for the movie Moonlight. The 32-year-old Damien Chazelle, director of La La Land, won the “Best Director” award, making him the youngest director to ever win an Oscar.

The night’s shocking scene came as a result of La La Land being mistakenly announced as “Best Picture.” When Warren Beatty and Faye Dunaway named La La Land as the winner, the movie’s filmmakers started to get on stage to receive the Oscar, only for the mistake to be corrected and Moonlight to be announced as the actual winner. To overcome this embarrassing situation, PricewaterhouseCoopers, the auditing firm that counts the Oscars, released a statement in which they apologised for the unprecedented mistake, which left both the audience and the movie’s creators baffled.

Although there were higher expectations for Mel Gibson’s Hacksaw Ridge, the movie only won the film editing and sound mixing awards. The same goes for Arrival, which was nominated for a number of categories but only won the sound editing award.

John Legend’s outstanding live performance for the “Fools who Dream” and “City of Stars” grabbed the attention of the attendees and viewers, who considered it as one of the best shows for the night.

Kimmel, whose jokes were praised by some of the previous presenters of the Oscars, such as Ellen DeGeneres, closed out the show with a last joke saying, “I knew I would screw this show up; I really did.”