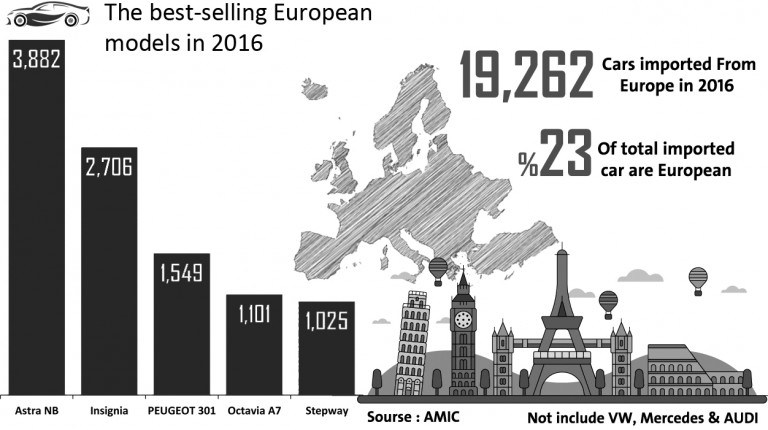 In a further escalation, the European Automobile Manufacturers’ Association (ACEA) and the Egyptian Auto Feeders Association (EAFA) sent a joint letter to Jean-Luc Demarty, director general of the French Directorate-General of Customs and Indirect Taxes, expressing their complete rejection of the automotive draft law, scheduled to be passed by the Egyptian House of Representatives in the coming period.

Daily News Egypt obtained the letter in which the two associations said that if the automotive draft law was approved, it would severely harm imports of members of the ACEA, especially since the aim of the Egyptian-European partnership agreement was to create a free-trade zone through full exemption from all industrial tariffs between the European Union (EU) and Egypt.

ACEA expressed its understanding of the goal of the draft law, which is to increase cars and auto-parts production in Egypt. This strategy, however, raises huge concerns among its members, since it would lead to the elimination of imports, and sets up new obstacles for European investments into the automotive sector in Egypt.

The letter pointed to several issues: replacing current customs duties on vehicles with a unified customs tariff of 10%—regardless of the existing trade agreements; developing a new industrial development tax ranging between 30% to 135% on cars—according to engine capacity and type of vehicle; and providing an exemption from the industrial development tax for companies that can achieve the local component ratio, the economic quantity of production, and the value of export with incentives ranging between 23% and 57%.

They added that the tax incentive scheme will negatively impact the business activities of members of the ACEA in Egypt. They also noted that the eight-year period, suggested for achieving the required local production rates, starts on the date of publication of the law in official newspapers.

They further stated that the draft law may raise questions about the compatibility of these items with Egypt’s obligations under the World Trade Organization (WTO) agreements and the agreement of the European partnership, identifying four problematic parts in this regard. The Directorate-General of Customs and Indirect Taxes agreed that the taxes proposed in the procedures of the draft law are incompatible with Article 3 of the General Agreement on Tariffs and Trade (GATT), and with Article 20 of the Egyptian-European partnership agreement, which was also emphasised by the legal department of the European commission.

The ACEA renewed its opposition to the planned tax incentives for the automotive sector in Egypt, however, it stressed its strong support of trade and investment relations between Egypt and the European Union.

The two associations expressed their concerns over the additional administrative burden imposed by the Egyptian Customs Authority, which led to the cancellation of some imports due to high customs duties.

They called for the EU to negotiate with Egypt to reconsider the application of this strategy, or make the necessary arrangements to ensure that Egypt will fulfil its international obligations.

Tamer El-Shafie, head of the feeder industries department in the Chamber of Engineering Industries, who is one of those in charge of the development of the automotive industry strategy, ruled out that the opposition of the ACEA could delay the issuance of the awaited Egyptian automotive strategy.

He described the letter sent by the ACEA as a normal response, as every side cares about its interests and seeks to limit competition.

El-Shafie said that the new automotive strategy would grant the same advantages to all countries and international companies, offering some more advantages to producers.

He asserted that Egypt has the right to promote its local products through increasing the ratio of locally manufactured components.

He noted that all the items of the strategy were reviewed by the Cabinet and the Ministry of Industry and Trade, refuting any dispute over the agreed-upon items.

A member of the Federation of Egyptian Industries (FEI), who participated in the discussion over the feeding industry strategy, said that this letter proves that the two associations have not read the final version of the automotive strategy.

He refuted European claims that some items of the automotive strategy violate international agreements signed by Egypt, especially the imposing of a 30% industry development fee, noting that this item has been amended and it does not violate any agreement.

He pointed out that an EU delegation visited Egypt last year and that they discussed all the items of the automotive strategy, including the disputed items, adding that the Egyptian government explained its point of view and that the delegation was very understanding.

However, many European companies operating in Egypt welcomed the associations’ letter and asserted that they support the position of their parent companies, particularly as they intend to increase their investments in Egypt. They called for those in charge of the formation of the strategy to rescue the situation, resolve disputes, and find a solution that satisfies all concerned parties.

Daily News Egypt learned that it is expected that German chancellor Angela Merkel will discuss the Egyptian automotive strategy during her scheduled visit to Egypt in March.