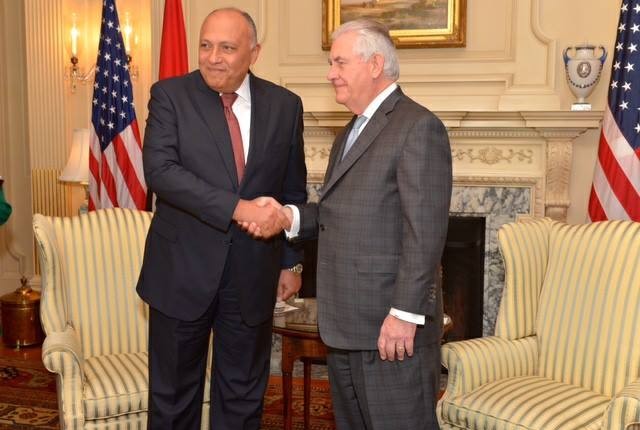 Egyptian Minister of Foreign Affairs Sameh Shoukry conducted two meetings since his arrival to Washington on Monday: one with US National Security advisor H. R. McMaster and another one with secretary of state Rex Tillerson.

Both meetings focused on developing and discussing ways of strengthening and increasing partnership and cooperation between both countries.

McMaster was appointed to his position a week ago, and his meeting with Shoukry is considered to be his first with a non-US official.

Shoukry expressed his aspiration to work with Tillerson during the next period in order to support and promote Egyptian-American relations. He also emphasised the importance of achieving common US-Egyptian interests, especially under the administration of recently elected US president Donald Trump.

Moreover, the minister reviewed the economic, social, and political situations in Egypt, noting that all decisions the government takes are supported by all Egyptians.

McMaster was keen to hear Shoukry’s point of view about Egypt’s effort to fight terrorism and the latest developments in Libya, Syria, Iraq, and Yemen, as well as the Palestinian issue.

The US official confirmed his country’s interest to enhance bilateral cooperation with Egypt in various fields during the next phase. He added that the US administration is looking forward to strengthen coordination and consultation with Egypt to identify common priorities and to protect the interests of both sides.

As for Shoukry’s meeting with Tillerson, it mainly focused on the bilateral relations between both administrations and reviewed Egypt’s internal and external work updates.

Tillerson said during the meeting that the US considers Egypt as a real partner in facing the Middle East’s challenge. The meeting asserted the depth of the strategic relations between the two countries.

During the meeting, Shoukry and Tillerson discussed ways to support and strengthen their relations under the new American leadership. They also exchanged views on a number of regional issues, particularly of ways to support stability and peace in the Middle East.

Tillerson listened to Shoukry’s discussions about the latest economic, political, and security developments in Egypt, as well as the government’s recent decisions for economic reforms.

Shoukry also reviewed challenges related to counterterrorism in Egypt and the region and explained how this requires concerted efforts from the international community to eliminate extremism.

Regarding regional issues, Shoukry explained that Egypt’s stance towards Syria is based on supporting the aspirations of the Syrian people and protecting their national unity. He added that Egypt is keen on preserving Syria’s institutions through a political solution that would be agreed on by all parties. The minister further reviewed Egypt’s latest work for the Libyan crisis and the Palestinian issue.

Tillerson asserted the US’ intention to support Egypt in fighting terrorism, as well as supporting its economic reform programme.

Shoukry’s meeting with Tillerson was agreed on two weeks ago during a phone call, when the US official invited Shoukry to visit Washington.

Egyptian-American relations have been improving since the election of Donald Trump, as both countries’ administrations share common interests. Shoury’s visit aimed at increasing the work between both countries, asserting its current strong ties.