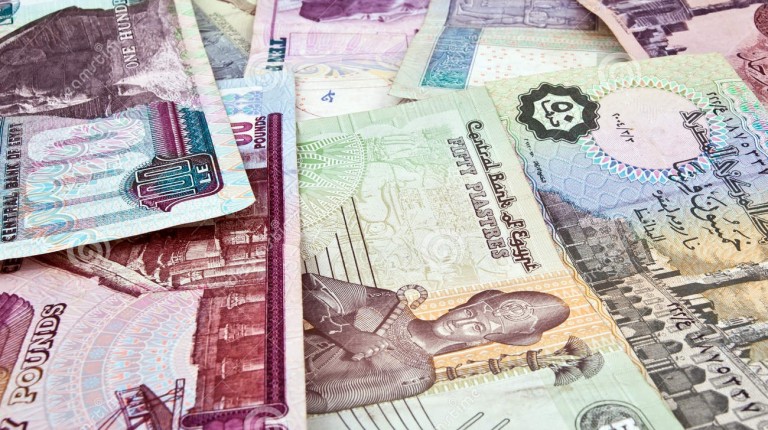 Squeezed by turbulence and uncertainty since 2011, Egypt’s economy encountered numerous challenges, such as the prolonged political transition that led to the build-up of macroeconomic imbalances. The government decided to adopt an economic reform programme—backed by the International Monetary Fund (IMF)—which included the introduction of the value-added tax (VAT) law, the reduction of fuel subsidies, and the liberalisation of the foreign exchange market, which took place in November.

Three months after the Central Bank of Egypt’s (CBE) decision to free-float the Egyptian pound in November, improving external flows are driving stabilisation in the foreign exchange (FX) market, spearheaded by the successful Eurobond issuance, which has encouraged carry trade investors, who have now invested more than $2bn in T-bills since the float, according to the CBE. The ensuing USD-EGP appreciation over the past couple of weeks that came after the currency stabilised at a trading range of EGP 18-19 for nearly two months, in addition to narrowing bid-ask spreads, all point to a more healthy and efficient market, according to EFG Hermes’ “Egypt Economic Update” report published in February.

EFG Hermes forecasts limited risks of the Egyptian pound weakening beyond this range in the medium term and expected a trading range of EGP 16-17 by the end of 2017. The report mentions that the magnitude of the appreciation could have been larger had it not been for the fact that most portfolio flows were neutralised by flowing through the CBE repatriation mechanism. The report added that the recent EGP appreciation is likely to be counterbalanced in the short term by remaining backlogs, pent up demand for FX, and removing remaining capital control in June. Key risks for further appreciation are mainly more portfolio inflows outside of the repatriation mechanism and tourism recovery.

In regards to receiving the second tranche of the IMF loan, the report explains that authorities have largely met the various monetary, fiscal, and reserves targets to receive the second tranche of the IMF loan. They believe this will further boost confidence. However, longer-term fiscal targets remain to be challenging, given the larger than expected devaluation. As such, it is forecasted that such targets would be subjected to some revision when the IMF visits Cairo for a first review.

According to the report, interim data point to a typical post-float oscillation between slowing domestic demand and improved external ones. For instance, automobile sales collapsed to a more than three-year low in November, which highlights the shock to consumer spending. Yet, a small export base is likely to limit the immediate spillover of improved exports on the broader economy, especially as tourism continues to suffer as a result of the Russian travel ban.

Economy is on the path to stability

Three months following the CBE’s decision to liberalise the foreign exchange market, the Egyptian pound slowly moved in its stabilisation path as inflows improved and backlogs gradually cleared. The currency is finding a stable trading range between EGP 17-19 against the US dollar, with spreads between bid ask prices narrowing, which signals improvements of market conditions. While the banking sector was successful in attracting strong inflows within the same period, driven by de-dollarisation and migration of liquidity into official channels. According to a previous CBE statement, total inflows into the banking sector stood at $9bn in the three months leading up to January, with a normalised running rate of $2bn a month.

On the other hand, with regard to private capital inflows, the carry trade is showing remarkable signs of recovery, with foreign holdings of government debt reportedly crossing the $2bn mark by mid-Feburary from nearly zero for the past few years. The main driver for further inflows was the successful Eurobond issuance in late January as it reinsured investors on the outlook of the Egyptian pound. Consequently, the test-trades with small tickets in November and December have shifted into bigger ones in the past couple of weeks, according to the report.

Furthermore, a similar trend is witnessed in foreign flows into the equity market, with net purchases by foreign investors reaching $491m since the flotation. More sizable flows are challenged by the market’s dwindling size and liquidity over the past few years. The government’s planned pipeline of initial public offerings (IPOs), largely comprising a couple of banks and some companies in the petroleum sector, remains a catalyst for further inflows.

Moreover, the witnessed recovery in remittances provided an additional source of inflows, in line with EFG Hermes’ previous expectations. Remittances jumped by 37% quarter–to-quarter, and 17% year-to–year, to reach $4.6bn in Q4 2016, following five consecutive quarters of continuous decline. The liberalisation of the FX market was the main driver behind encouraging Egyptian expatriates to send money back home, which ended the phenomenon of an off-shore parallel market, which, together with challenging macro conditions in the countries of the Gulf Cooperation Council (GCC), dealt heavy blows to such transfers.

EFG Hermes forecast that the Egyptian pound will be on an appreciation path in 2017, which is reinforced by the recent strengthening in the local currency as flows continue to improve. The report noted that appreciation would have been potentially stronger had it not been for most portfolio flows hitting the market through a repatriation mechanism that leads dollars to flow into the CBE’s accounts rather than the market.

According to the report, the cornerstone of the recent Egyptian pound appreciation was the Eurobond issuance, as it completely covered the funding gap of fiscal year (FY) 2016/2017, leaving investors at ease with taking the currency risk. With some of the bigger tickets into the fixed-income market flowing outside the mechanism, the interbank has seen decent improvement in volumes with the repatriation backlog cleared.

The report forecast the currency to remain within the EGP 17-18 range through the end of 2017, as the recent appreciation is likely to be balanced with higher demand as the currency becomes relatively more affordable. Additionally, seasonality associated with Ramadan may also yield some short-term pressure on the Egyptian pound.

Moreover, remaining backlogs, in addition to the lifting of the last-standing capital controls, namely deposit limits on importers of non-essential goods and caps on personal transfers by June 2017—in contrast with the IMF agreement—may also yield some short-term pressure on the Egyptian pound. Outstanding payments to international oil companies are excluded from the backlog estimate, as they are to be cleared directly through reserves.

One additional key upside risk to EFG Hermes’s Egyptian pound forecasts is the recovery of the tourism sector, with revenues currently running at nearly a two-decade low. This would be mainly through lifting the travel ban imposed by Russia, Egypt’s largest tourist market. With estimated potential revenues of around $2-3bn, it will represent a major boost for the current account balance.

According to the report, leading macro indicators suggest that Egypt’s economy remains in a shock absorption period as a result to a second wave of the inflationary pressures—which emerged following the float—with the currency dashing any hopes of short-term appreciation. Businesses went on an aggressive and immediate path of price increases to accommodate their new cost structures. 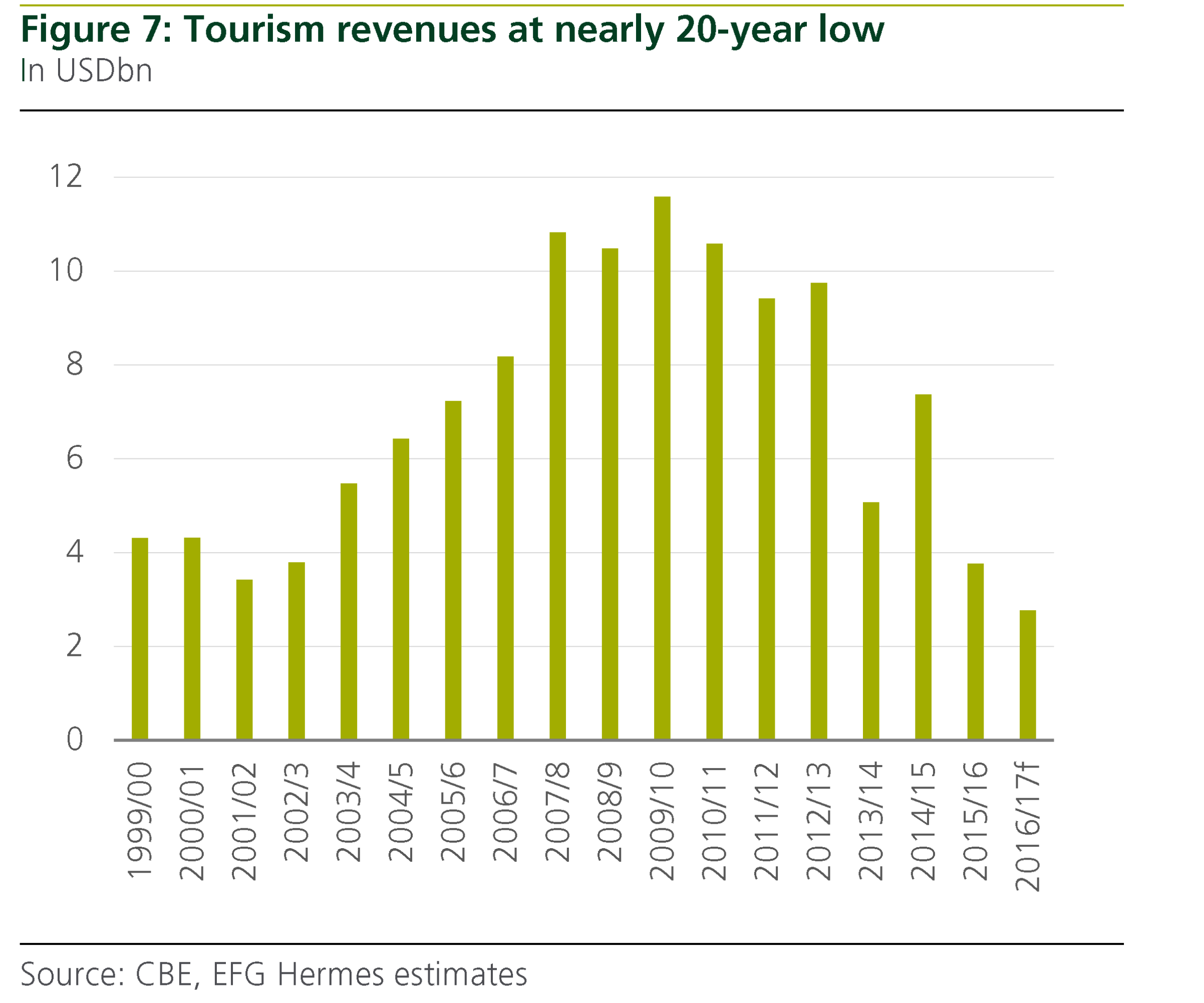 Thus, a clear divergence can be seen between domestic and external demand, as Purchasing Manager Index (PMI) data show. Domestic demand is still showing signs of weakness due to the fact that consumers are largely showing a typical knee-jerk reaction to the rising inflationary pressures. Automobile sales, a proxy for consumer sentiments, fell by 38% month-to-month in November, reaching a three-year low, with no signs of recovery in December.

In regards to inflation, the stability of the USD-EGP exchange rate in the last couple of months is likely to tame inflation expectations for both consumers and businesses. EFG Hermes argues that inflation is approaching its peak, which they forecast to be reached in March/April before starting to stabilise.

However, EFG Hermes has adjusted their inflation forecasts for FY 2016/2017 to 23.5% from 19.8%, and to 13.9% in FY17/18 from 11.2%, as a result of their expectation of a slower pace of the Egyptian pound’s appreciation. The report explains that a key upside risk to the inflation forecasts is the rally in global food prices, in addition to the recent pick-up in global oil prices following the Organization of the Petroleum Exporting Countries’ (OPEC) deal, leaving the balance of risks mostly to the upside.

Egypt is making good progress in the loan programme, IMF