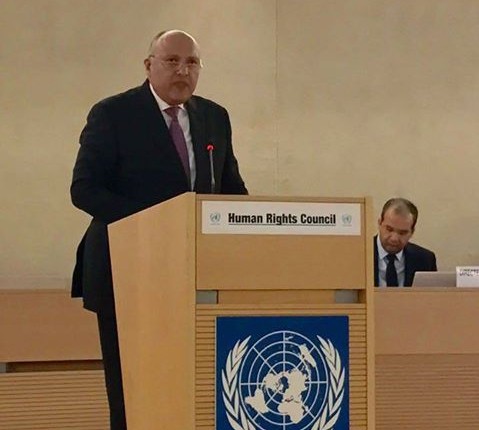 In his speech on Wednesday during the 34th session of the United Nations Human Rights Council, Egyptian Minister of Foreign Affairs Sameh Shoukry talked about positive and constructive developments in Egypt in the field of human rights.

This was the first participation of Egypt in the council after being elected to it last October.

Regarding human rights, Shoukry referred to the presidential committee’s decision to pardon detained youth, the amendments of the protest law, and the country’s progress in promoting the right of young people to work, as well as talking about the president’s National Youth Conference.  He further added that there are significant advancements concerning the status of women in Egypt on the political and social level, as well as in the field of freedom of expression.

Shoukry noted that it is important to deal with human rights issues through a global perspective, which is not limited to political and civil rights, but also extends to economic and social rights. Egypt is committed to promoting principles and standards of human rights, as well as to granting fundamental freedoms, he asserted.

He furthermore noted that the number of NGOs working on the development of the Egyptian society has increased to 50,000.

Shoukry also asserted Egypt’s success during the country’s democratic transformation, amid the security challenges in the country and the Middle East in general.

The minister concluded his speech reviewing Egypt’s progress regarding regional issues, referring to its keenness on fighting the spread of terrorism, asserting Egypt’s role in unifying international efforts to root out sources funding terrorist groups.

Furthermore, Shoukry continued to hold a meeting with high-ranking officials in the United States during his third day in Washington.

Shoukry’s meeting with representatives of American Jewish organisations saw discussions on ways to activate and strengthen US relations with Egypt in economic, political, and military fields. It also witnessed discussions on the importance of intensifying coordination and political consultation on regional issues and finding solutions to deal with the crises facing the Arab countries.

During the meeting, Shoukry also reviewed Egypt’s assessment of the situations in Yemen, Syria, Iraq, and Libya, and their impact on security and stability in the Middle East.

Meanwhile, the organisation’s representatives asserted Egypt’s stability, the success of its reform programme, and its importance to the US.

The Egyptian foreign minister was keen to answer representative’s inquiries on Egypt’s vision of how to continue the Israeli-Palestinian peace process, and also the important role played by Egypt in order to encourage Israelis and Palestinians to resume negotiations.

He also met with Republicans David Trott and Kay Granger, with both meetings focusing on bilateral relations, discussions on regional issues, and ways to confront terrorism.

Released will be allowed to return to work and normal life: Detained Youth Committee