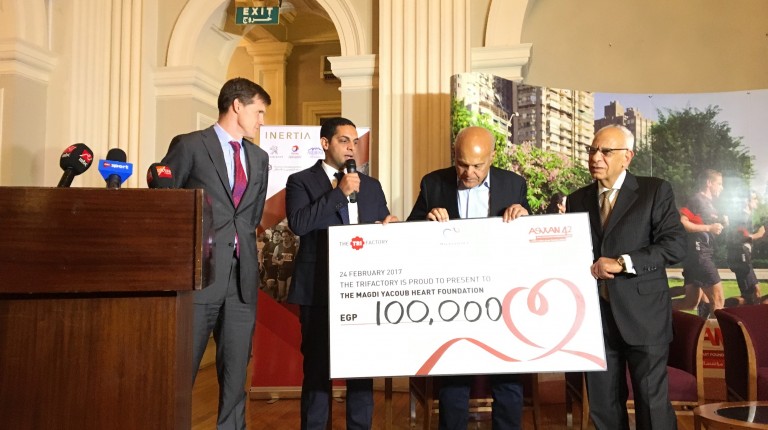 On 28 February, British ambassador to Egypt John Casson hosted the Aswan Marathon, where Professor Sir Magdi Yacoub—who was one of the runners of the Magdi Yacoub Heart Foundation Marathon held on 24 February—was the guest of honour at the reception celebrating the marathon.

Sir Magdi Yacoub was accompanied by leading figures from his foundation and from Aswan Heart Centre. The celebration of the marathon—which was supported by the embassy’s “Inspire Egypt” campaign—culminated in the presentation of a cheque to the Magdi Yacoub Heart Foundation by Ayman Hakky, founder of The TriFactory.

Also present at the event were a range of other groups promoting and participating in sports in Egypt. This included Faiza Heider, captain of the Egyptian women’s football team, who spoke of the importance of women and girls taking part in sports activities. Other groups, such as Cairo Runners and the Global Biking Initiative, attended and spoke of their future plans. Furthermore, the event was used to shine a light on some unsung heroes, including the blind football team and Cairo Crit. This event took place under the auspices of the embassy’s new “Inspire Egypt” initiative, which aims to showcase inspiring Egyptians doing inspiring things.

The Magdi Yacoub Heart Foundation Marathon brought together 1000 athletes from 32 different countries to run along the Nile. The TriFactory is the organiser of Sahl Hasheesh Triathlon, Aswan Marathon, and the African Triathlon Cup, as well as being a supporter of the World Triathlon Series in Abu Dhabi.

The  Foundation treats underprivileged patients suffering from heart diseases by providing around 3,000 free heart surgeries per year. The marathon raised over EGP 100,000 for the foundation’s work. The other groups on display during the evening were Cairo Runners, GBI, Maadi Athletes, Alex Runners, Cairo Crit, Muricata, and the blind football team.

“Inspire Egypt” is the initiative of the British embassy Cairo that celebrates inspirational Egyptians from all walks of life, bringing them together and investing in their potential to make a difference to Egypt and the rest of the world. Previous events have showcased women only speed mentoring and the slowfood movement, while there are plans for events on special needs and education.

Professor Sir Magdy Yacoub said in this regard: “we’re extremely grateful for the efforts of Tri-Factory, both to organise this event, and to raise funds for the heart foundation. Egypt has one of the highest rates of heart disease in the world, and I’m pleased to see so many people taking part in regular sports, which is a crucial part of fixing this problem.”

John Casson, the UK’s ambassador to Egypt added: “it is inspiring to see Egyptians bring the same energy to solving the country’s social challenges as they bring to their daily lives. What we have in front of us is a group of young Egyptians, partnering with the leading light in the field of heart surgery, on an initiative that is helping the country. This is a clear example of inspiring Egyptians doing inspiring things. That’s what Inspire Egypt is all about. Empowering Egyptians to solve problems and build the new Egypt.”