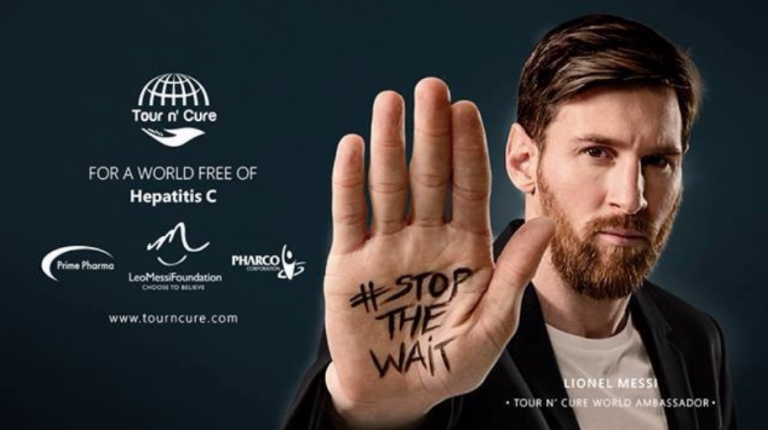 Tamer Wagih, the chairperson of Prime Pharma, said that the company launched the programme at the end of 2016 to promote Egyptian “medical” tourism.

He told Daily News Egypt, “the renowned football star Messi and a number of Egyptian celebrities are also endorsing the campaign abroad.”

“Messi’s visit to Cairo in February echoed worldwide, where the company received six requests from foreign countries, including Romania, Spain, England, and Pakistan, to treat their nationals in Egypt,” he added.
He stressed that Messi’s visit achieved the intended goal. “The entire world saw his picture next to the pyramids, which further intensified the campaign,” he explained.

Wagih noted that the Egyptian market will become the number one destination for the treatment of hepatitis C.
The number of patients with hepatitis C is estimated to be 200 million, of which around 2,000 die every year, according to the World Health Organization.
Wagih explained that the Tour n’ Cure programme launched in 2016 by Prime Pharma in cooperation with Pharco Pharmaceutical, is an integrated treatment plan that includes medical examinations in Egyptian hospitals, administrations of specified doses, and a one-week rehabilitation vacation, following four months of treatment.
He said that Prime Pharma agreed on arrangements with the Ministry of Tourism and EgyptAir to cooperate in order to attract patients from around the world and provide them with healthcare in Egypt. This is done through offering a 50% discount on airline tickets, as well as deals with five-star hotels to host patients during their week of sightseeing vacation.
The programme provides treatment for foreigners at a total cost of $5,900, including accommodation and airfare. In other countries, treatment usually costs an average of $100,000.
Wagih said that the programme includes the administration of hepatitis C drugs for four months, along with all necessary tests.

The programme also provides phone consultations after patients return to their home.

He explained that patients interested in getting treatment in Egypt can register and send their tests through the website to be reviewed by the doctors in Egypt.

“After ensuring that the patients’ conditions can be cured by Prime Pharma medication, a date is set for the patient to come to Egypt within two weeks from registration,” he added.

Moreover, Wagih noted that the program asks patients to send in monthly tests to ensure there are no setbacks, adding that if any patients needed further treatment, they are re-hosted.

He mentioned that Prime Pharma is conducting promotion campaigns for the Tour n’ Cure programme in England, Spain, Turkey, and Malaysia, with plans to move to Saudi Arabia and the United Arab Emirates (UAE) next month.

Wagih pointed out that the company has one contract with Pharco Pharmaceutical, which produces 5,000 packages of locally produced Sovaldi per day.

Prime Pharma is one of Prime Holding Group companies, established in 1995 with 12 subsidiaries in construction, recreation, tourism, and food sectors.