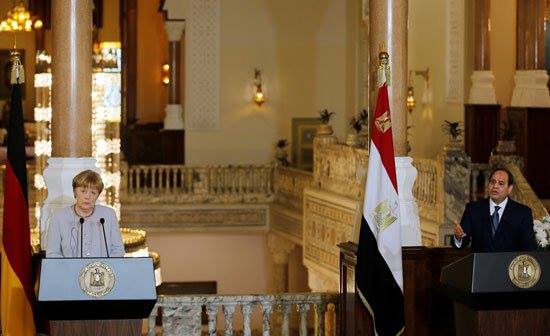 During Thursday’s press conference held by Egyptian President Abdel Fattah Al-Sisi and German chancellor Angela Merkel, the chancellor stated that nearly 1,000 Egyptians reached Germany illegally. Merkel came to Egypt on Thursday for a two-day visit and is set to head to Tunisia later on Friday.

Merkel asserted that the Egyptians who are currently living in Germany illegally should be deported, stating that she will discuss the acceleration of the deportation of them with Al-Sisi, adding that some had already left Germany voluntarily while others will have to be forcibly deported.

“We will continue discussions regarding that matter until it is resolved,” she said during the press conference broadcasted on Egyptian state TV.

Merkel noted that Germany is providing Egypt with financial support for the sake of improving the living conditions of refugees. Moreover, she discussed with Al-Sisi the refugee crisis in Europe.

This is Merkel’s first visit to Egypt since 2009, and her first official meeting with Al-Sisi since he visited Berlin in 2015.

Conservative politican Angela Merkel, who will run for another term in the upcoming German federal elections in September, is facing right-wing pressure regarding the number of asylum seekers. In 2015 Merkel had let in around one million refugees in an effort to ease pressure on Europe’s southern border, a measure that contributed to the rise of the far-right party AfD.

On a regular basis, the German government urges the governments of Egypt and other North African countries to intensify border controls and accelerate the process of returning migrants whose applications for asylum had been rejected.

In the wake of the Arab Spring and the Syrian civil war, nearly 1.3m migrants and refugees came to Europe via various routes, according to a Pew Research Center analysis of Eurostat figures from 2015. Most of them came from the Middle East and Africa, seeking to escape armed conflicts, harsh living conditions, and political persecution.

Ali Abdul Aal to meet with vice-president of German parliament