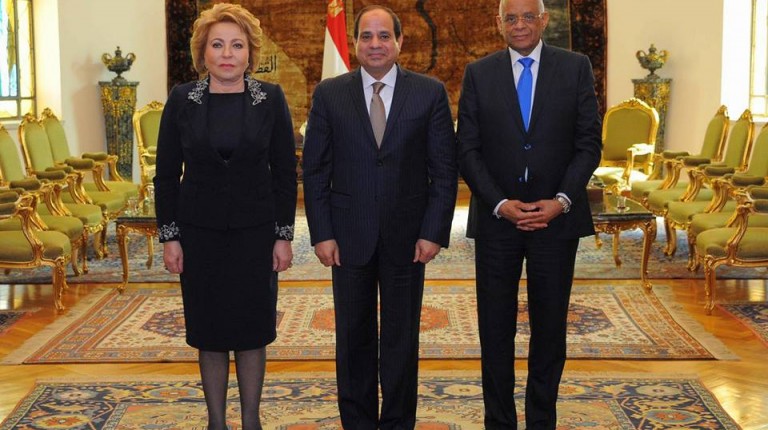 Russia is looking forward to promote its relation with Egypt, said Valentina Matviyenko, the chairperson of the Russian Federation Council, during her meeting with President Abdel Fattah Al-Sisi on Saturday, according to the statement of presidency spokesperson Alaa Youssef.

The meeting saw the attendance of parliament speaker Ali Abdel Aal as well as Egyptian ambassador to Russia Mahmoud El-Dieb.

During the meeting, Al-Sisi confirmed the strength of the Egyptian-Russian relations and asserted Egypt’s keenness to further strengthen those ties. He added that the parliamentary relationship between them has become the most essential aspect of their relations.

He also noted the importance of creating more partnerships with Russia in various fields, especially in the economic and commercial ones, through establishing industrial zones and logistics centres in Egypt.

On her side, Matviyenko praised Egypt’s role in the Middle East and its efforts to restore the region’s stability and security. She further added that Egypt plays an important role in fighting terrorism, either through martial means or through an intellectual and cultural level.

She also asserted Russia’s commitment to assist the Egyptian people by supporting the efforts of Egypt’s government to develop the country.

Matviyenko, accompanied with high-ranking officials, arrived to Egypt on Friday for an official visit until Sunday.

Al-Sisi to hold talks with Merkel within hours