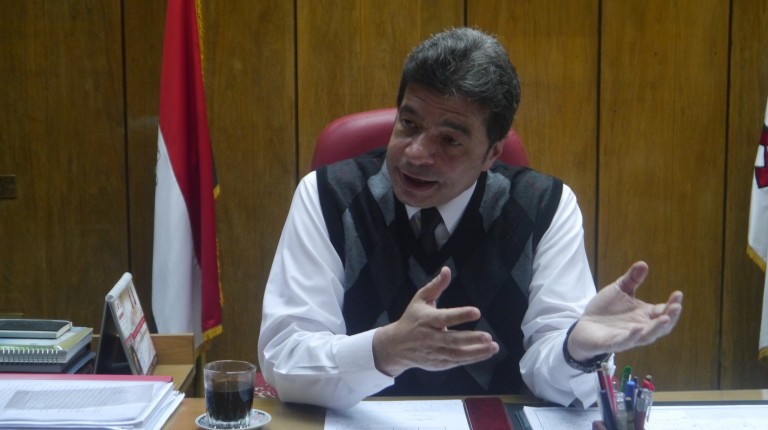 The Industrial Control Authority (ICA), affiliated with the Ministry of Industry and Trade, has established the Citizen Service Guide unit and launched a hotline phone number—19873—to receive complaints and consumer inquiries about poorly made products.

Ibrahim Al-Manasterly, chairperson of the ICA, said that the authority is responsible for the control of products traded by an industrial facility, but they established the new unit to limit the spread of unlicensed projects, which do not follow the specifications and quality standards. However, these products became quite popular after the increase of most product prices, especially food products, due to the recent government decision to float the pound.

How could the new unit eliminate the informal market?

The Citizen Service Guide unit provides communication between the consumer and investor, as well as the ICA, in the case that a certain product does not follow the specifications and quality standards of the market. It also receives citizens’ complaints regarding after-sales service centres, known as maintenance centres.

How many complaints have been received by the new unit since it was launched in January?

The ICA has received about 120 complaints and 144 inquiries since January.

What are the main industrial sectors that raised inquiries?

Most inquiries and complaints submitted to the Citizen Service Guide are related to the food industry and electrical appliances.

What are the main tasks of the ICA?

The ICA has supervisory and service roles. Our supervisory role includes holding inspections of factories in various industrial sectors to ensure the applying of official standards set by the state for those products. The authority is entitled to take action against violating factories. Our service role is to help industrial enterprises to increase their efficiency.

What are the possible actions to be taken by the authority in case it spotted a violation in one of the industrial establishments?

The procedures vary according to the type of violation. If it was a small one, such as the absence of some documents, we would notify the factory owner and give him a notice, and then we visit the factory again to make sure it has completed its documents.

If the violation was related to product quality or risks consumer safety, we would stall production, seize the existing products, and file an official report against these products to make sure the factory will not sell them in the market. Moreover, the ICA addresses the local management of the governorate to shut down the factory, but this decision is taken only when we found that the violation was committed deliberately by the factory.

One of the reasons of product violations is that the production halls did not match with the optimal conditions for the production process, or that the factory did not have laboratories to examine the quality of its products.

Why does the ICA sometimes resort to closing down some industrial facilities?

Some facilities face violations for not completing the technical paperwork and permits for constructions. But this is likely to become less, following the passage of the permits law, which is now being discussed at the parliament.

Does ICA have a role in rerunning those halted factories?

Yes, we communicate with the owners and help them abide by the production specifications, improve efficiency, and assist them with establishing labs to ensure quality.

What is the average number of factories closed down per month, due to the initial inspections?

The average is 3-4 factories per month nationwide.

You mentioned that ICA confiscates inappropriate products. How many products did you confiscate this year?

We confiscated about 100 tonnes in a beans factory located in the Borg El-Arab Industrial Zone in Alexandria.

There were some recent rumors on trading chemicals and using them in terrorist activities. Does the ICA have a role in controlling these substances?

The ICA is represented in a tripartite committee that includes the Ministry of Interior, the Ministry of Justice, and the Ministry of Health. Together, they work to tighten control on specific chemicals traded in the market that may be used in primitive home-made bombs, such as potassium permanganate.

The role of the ICA here is to raid factories that use these chemicals and review the quantities they are allowed to use and the products they have been producing to make sure that they fit within the standard, and that the quantities they handle were appropriate to their production contracts.

If the numbers do not add up, we notify the Ministry of Interior, and we ban circulation of this substance in the offending factories until understanding why they were missing from the final products.

Do you cooperate with other regulators to curb shoddy products?

Yes, we also cooperate with the Investigation Department of the Ministry of Supply. Our representatives are always included in their raids on markets to curb the trading of poorly made products.

We also cooperate with the Industrial Development Authority and the General Organization for Export and Import Control through providing them with suggestions to limit imports of specific materials that may be used in manufacturing shoddy products.

We, with these authorities, also conduct inspections on factories to review if they use the quantities they imported or smuggle them. We test samples to make sure they fit the specifications.

The Egyptian Organization for Standardisation and Quality is currently forming a committee that will include the ICA and the Federation of Egyptian Industries to assess products and implement new specifications.

Moreover, the ICA is also set to begin cooperating with the Ministry of Petroleum to oblige electrical appliance companies to install water heaters for consumers on the hands of specialised technicians to avoid problems.

What is the role of the ICA in following the work of after-sales services and maintenance centres?

We do not only supervise factories, but also grant licenses for maintenance centres.

How many licenses did you grant in January and February, as well as in 2016?

The ICA granted licenses to 127 service centres in January and February and 877 centres throughout the past year.

According to the type of centre. Procedures are often completed within one week, except for exclusive dealerships, which require longer measures to ensure they obtained the right they claim to have.

What is the role of the ICA in limiting scams in after-sales service centres?

The authority suffers from a lack of communication with cable channels to notify us with the hotlines for service centres that will air their ads to make sure they are authorised.

One of the electrical appliance companies that specialises in washing machines has suffered recently from the presence of many hotlines claiming to offer after-sales services for that brand. Many clients fell victim to these fake centres.

How will you face that?

We are asking channels to notify us with the information of these centres before airing their ads so that they do not promote false information.

Due to the frequency of these scams, we are in touch with Telecom Egypt to explain whether these centres were authorised or not.

Furthermore, we are also organising awareness campaigns to advise citizens to call us before dealing with any of those centres to avoid falling for their scams.

How many field inspections did the ICA conduct last year?

We carried out 9,734 field inspections, including inspecting the quality of products through samples and analysis. We also investigated 240 complaints from citizens.

Do inspections cover all governorates?

The ICA has 18 offices across the republic. We have a general authority in Assiut and offices in Qena and Minya.

What are the main industrial sectors that you inspected?

The most prominent is the food industry—as they have a direct impact on consumers—followed by electrical appliances. We actually receive most of the complaints from the food sector, especially in Upper Egypt.

Do you intend to conduct more inspections this year?

We aim to increase inspections by 15% per year. The average number of inspections is about 800 per month. We have a target of 9,900 inspections throughout Egypt this year.

How many inspections did you carry out in January and February?

We inspected 1,478 facilities: 748 in January and 730 in February. We aim to conduct 926 inspections in March. Additionally, we also took part in two inspections carried out by the Ministry of Supply and Internal Trading’s investigation department.

What is the standard used by the ICA to inspect factories?

The average of initial inspections varies monthly according to seasons. For instance, in the summer, we intensify visits to the food and beverages sectors, as they see growth in trading in that season.

During other Islamic celebrations, we lead more inspections of sweets factories, since high productivity increases the potential for mistakes.

The ICA is currently seeking to prepare a plan to monitor the performance of food and beverage factories, especially with the summer nearing. We are working to inventory the factories that we inspected and the problems we found, and we are planning to re-inspect them again.

How do you prioritise the factories to inspect?

In our main plan, the ICA categorises factories according to their performance and previous violations. We prioritise the factories in which we previously found violations.

The ICA acquitted Heinz of charges relating to trading bad products. Why so?

We did find some problems, but not to the extent in which it was mentioned on social media platforms.

Inspecting the factory did not result in finding violations in the tomatoes used in producing ketchup and tomato paste; therefore, it did not indicate an impact on citizens’ health. But we did find violations in the production halls where tomato paste was being manufactured, which needed repairs, but nothing more.

We also found that windows need minor maintenance. These notes were sent to the factories. We will conduct another inspection soon to ensure that they have fixed the issues.

The ICA conducted field studies of the company and took samples to analyse. We found that products fit within the standards.

Preliminary inspections found some returned products, which, even though they were at the factory, they were tagged as rejected and will not be resold. But the ICA was worried they may find a way to the market, which made us insist on eliminating them before the eyes of the inspector.

What actions does the ICA need in order to tighten control on products?

We demanded so much for an ICA law to grant us the authority to take direct legal action without interference from other agencies.

Summer usually comes with a higher risk of fires. What do you do to limit that?

Launch of industrial development strategy most important achievement in 2016: Kabil