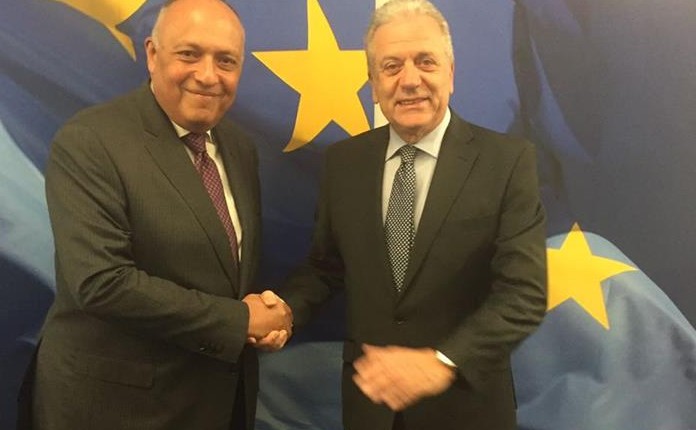 Egyptian Minister of Foreign Affairs Sameh Shoukry attended a number of meetings with high officials in Brussels, which focused on illegal immigration along with bilateral relations.

These meetings took place on the sidelines of the EU’s Foreign Affairs Council that is expected to include discussions on the next phase, and to determine projects that Egypt aspires to implement in cooperation with the EU.

He also stressed Egypt’s stance to not establish refugee detention camps for immigrants in Egypt, noting that refugees and migrants residing in Egypt are enjoying a free and decent life.

He also valued the Egyptian role in Libya, which contributes to tackling illegal migration flows across the Mediterranean, pointing out that the EU is ready to cooperate with Egypt.

Shoukry also met with NATO secretary general Jens Stoltenberg in Brussels, in which their talks touched on the various security challenges threatening the region. Stoltenberg listened to the Egyptian vision about the crises in the region, particularly Egyptian efforts to bring stability and peace to Libya. The meeting also touched on the role of NATO to combat illegal migration in the Mediterranean area, and efforts to combat terrorism in Egypt and the region.

The minister began the meeting congratulating Stoltenberg, for the first time creating diplomatic representation in Egypt, which will introduce benefits for the relationship between the two sides.

He also reviewed various aspects of the Egyptian vision concering the issue of combating terrorism, pointing out the importance of fighting against extremist ideology and drying up the sources of financial and logistical support for terrorist organisations.

Regarding the bilateral cooperation between Egypt and NATO, both expressed their desire of strengthening and developing their relations to support the Egyptian goals and work together to address security challenges in the region.