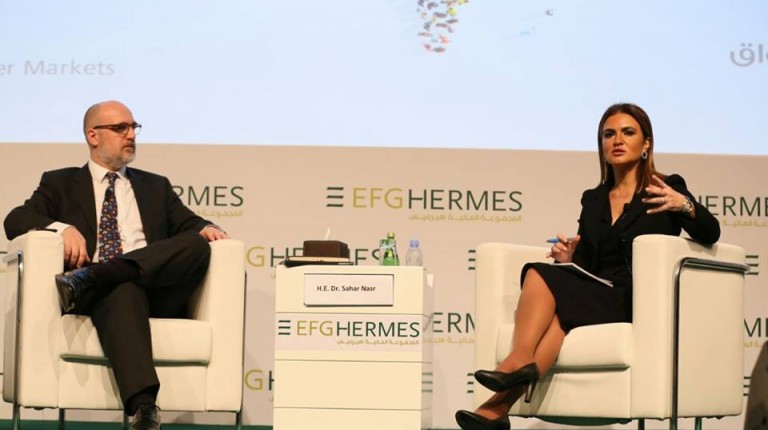 Minister of Investment and International Cooperation Sahar Nasr said that the ministry is working transparently, adding that investment laws must be clear to improve the environment of doing business. She noted that she wants small investors to support small and medium enterprises (SMEs), as well as increasing financing for them.

On Monday, Nasr took part in the opening session of the EFG Hermes 13th investment summit in Dubai, with the presence of a large number of Arab and foreign investors.

Nasr added that many investors, including some from Arab, Asian, and European countries want to increase their investments in Egypt. “We are working quickly to provide an attractive investment environment and eliminate obstacles,” she stressed, noting that attracting foreign investment relies on communicating with local businesspeople to solve their problems.

Moreover, Nasr pointed out that properly activating a law needs more than just passing it, adding that she regularly conducts visits to ensure providing the best facilities to investors.

According to the minister, the government has been working to make many decisions that will erode bureaucracy, pointing out that investors’ problems are being solved as soon as they emerge.

She said that the government wants to attract more investors quickly to eliminate unemployment, curb poverty, and boost economic growth, especially in the needy areas, including Upper Egypt. She explained that community development will provide more incentives to the sectors that aim to provide jobs for the youth.

Furthermore, the minister said that the public sector has been the main investor, but the government is working to support the private sector to increase its contribution in investment.

Additionally, Nasr answered questions by Arab and foreign investors who attended the session and explained that she decided to make Saturday a working day in the ministry. She also directed officials not to leave offices before completing pending requests.

Nasr and Emirati real estate tycoon Mohamed Alabbar also discussed the challenges facing his investments in Egypt on the sidelines of the conference.

Alabbar is the chairperson of Emaar Properties. The company was set to implement the New Administrative Capital project, where he signed a protocol with the government during the economic conference held in Sharm El-Sheikh in March 2015. However, the contract was never implemented.

In her meeting with Alabbar, Nasr said that the government is now penning an investment map for all the investment opportunities across all governorates, including projects in airports, marine ports, industrial zones, and free zones. This map will later be presented to foreign and Arab investors.