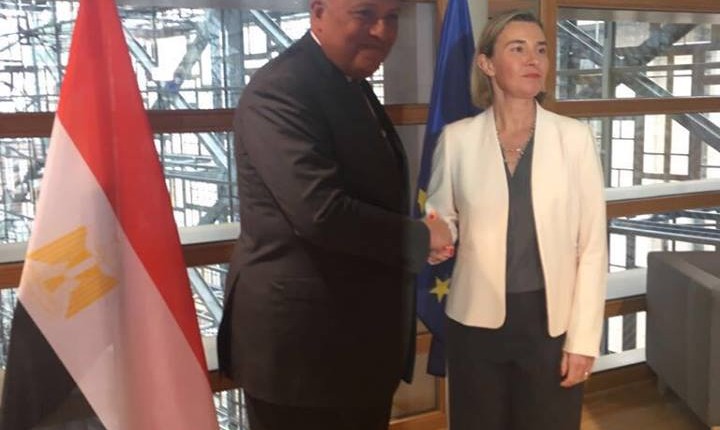 Abou Zaid accompanied Shoukry during his visit to Brussels that started two days ago. Shoukry’s participation in the EU meeting came as part of Egyptian moves to promote relations with strategic partners around the world.

Shoukry started the meeting giving a speech in which he expressed his appreciation for the negotiation process over the past year between the Egyptian and European sides, noting that these negotiations helped them agree on a document highlighting the priorities of cooperation between both sides over the next three years.

Shourky discussed the 2030 Sustainable Development Strategy—announced in February 2016—as a reference for the Egyptian side to negotiate on priorities of engagement with the European Union, in order to ensure the implementation of the national development agenda. The aforementioned strategy involves elaborating specific targets in the economic, social, and cultural categories, as well as focusing on women and youth issues.

The minister reviewed with his European counterparts the situation in Egypt after the implementation of the government’s economic reform programme and the latest economic measures taken during the recent period, as well as offering an explanation of existing security and social challenges.

Regarding the economic reform, Shoukry said that Egypt is looking forward to the EU understanding the nature of the reform process experienced by Egypt, along with other challenges.

The issue of illegal immigration was also a part of the ministers’ discussions, as Shoukry reviewed Egyptian efforts in this regard.

28 foreign affairs ministers were present during the meeting and discussed strategic Egyptian-European relations and the significance of supporting Egypt in different fields, Abu Zaid said.

According to him, the EU ministers expressed full appreciation for the central role played by Egypt in working to find possible solutions for issues in the Middle East, with the Libyan crisis as a top priority. They were also appreciative of Egypt’s role in the resumption of negotiations between Palestine and Israel, as well as its efforts to counter terrorism.

Since his arrival in Brussels, Shoukry met with high-ranking officials that included the EU commissioner for migration and home affairs and the NATO secretary general. These meetings focused on bilateral relations, regional issues, and illegal immigration discussions.

Shoukry to meet British, US counterparts in one week