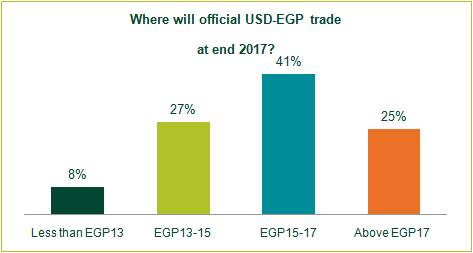 During the conference, Hermes conducted a survey on the hottest topics among business communities, taking the opinion of 510 investors from 260 companies and of management representatives from 147 companies.

The price of the pound against the dollar has seen much volatility following the flotation on 3 November 2016.

In a poll conducted by Daily News Egypt on 25 February 2017, bankers and experts said they expect the volatility to continue, ruling out the possibility of stability until the end of 2017.

Mohamed Abdel Aal, board member of the Suez Canal and the Arab-Sudanese Bank and prominent expert in exchange markets, said that the pound will undergo three phases in 2017. The first phase is resistance, which will end in the first quarter of 2017 and will move between EGP 17.5 and 20.5. The second phase extends from the second quarter up until the end of the third quarter of the year. During this phase, the dollar will decline to EGP 15.5-17. This will be followed by a third phase at the beginning of the last quarter, during which the dollar will range between EGP 14 and EGP 15.5, Abdel Aal said.

Tamer Youssef, head of treasury and capital markets at Bank Audi Egypt, said that the dollar price will reach EGP 16-17 by the end of the year.

Osama El-Menilawy, assistant general manager of the financial sector at a private bank operating in Egypt, expected the US dollar price to settle at EGP 16-18 until the end of the year.

In another context, 60% of respondents in Hermes’ poll said that the Middle East and North Africa (MENA) region’s performance will surpass that of emerging markets during 2017, while 43% stated that political instability will be the region’s most challenging factor. According to 42% of the participants, the possibility of increasing restrictions on trade is the highest risk global markets face in 2017.

Moreover, 46% of the respondents said that the Egyptian market will make the best USD-denominated revenues in the MENA region and among developing countries in 2017.

The future of product prices is unpredictable