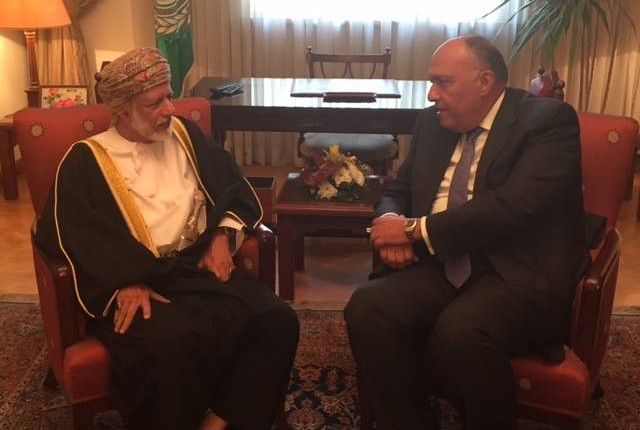 Egyptian Minister of Foreign Affairs Sameh Shoukry attended on Tuesday separate bilateral meetings with his Arab counterparts prior to the Arab foreign affairs ministerial meeting that is scheduled to take place in the local headquarters of the Arab League in Jordan.

Shoukry met with his Omani counterpart Yusuf bin Alawi bin Abdullah, in which they discussed bilateral relations. The officials stressed on the importance of continuing their bilateral work in order to achieve common interests compatible with the aspirations of the two countries.

The Omani minister praised the excellent level of cooperation achieved between both countries, and he also praised the two countries’ roles in facing challenges and threats in the region. However, both sides agreed that additional joint efforts are needed to deal decisively with the threat of terrorism and extremism.

The ministers also reviewed the developments of the Palestinian issue, and the Syrian and Libyan crises, in addition to the situations in Yemen and Iraq.

Both officials also discussed preparations for the Arab summit in Amman that is scheduled to take place in March, listing the most important issues to be included on the agenda of the summit, including deepening cooperation and coordination between the Arab states.

The Egyptian foreign minister also met with his Palestinian counterpart, Riyad Al-Malki, and discussed bilateral relations, including Egypt’s efforts in resuming negotiations between the Palestinian and Israeli sides.

The Palestinian minister started the meeting, reviewing the latest political and security updates in Palestine, especially the Israeli escalation of illegal settlements. He also valued Egyptian and international efforts for the Palestinian cause and the rights of the Palestinian people.

From his side, Shoukry highlighted the results of his visits and contacts with the new US administration during his recent visit to Washington, which focused extensively on the developments of the Palestinian issue and international efforts to reach a just and comprehensive settlement based on a two-state solution. He also stressed that his recent trip to Brussels contained similar discussions.

Shoukry also met with his Iraqi and Algerian counterparts. Both meetings included discussions on bilateral relations and ways to find possible solutions for the issues of the Middle East.

The meeting with his Iraqi counterpart focused more on ways to counter terrorism that is threatening security and safety in Iraq.

During the four aforementioned meetings, bilateral relations were on the forefront of the discussions, along with regional situations.  The discussions also included the various views of all sides regarding the summit in Jordan.

One day before these bilateral meetings, Shoukry was in Brussels—where he attended a meeting with 28 European foreign ministers—to boost Egyptian relations with the EU and to discuss illegal immigration and regional issues.