Many car factories halted production at the end of last week and sent letters to suppliers asking them to stop the supply for a period of two months—March and April—claiming that they will start annual maintenance works. Sources confirmed that the cessation of production was due to the market situation and the lack of vision for companies.

The sources revealed that most of the prominent companies have temporarily closed their factories for two months, such as Ghabbour Auto Company’s Prima plant, which assembles the products of Hyundai and Geely, and the Aboul Fotouh factory, which assembles the Chinese Chery products. The rest of the factories reduced the production by cancelling one or two shifts of production, as happened in the Nissan and GM factories.However according to press release by Ghabbour the plant closed for the annual maintainance.

The sources said that there are two reasons behind halting production: the large size of stocks at these companies, which hinders the production processes, and the significant decline in the demand of cars since December 2016 with an increase of the decline rates since the beginning of 2017.

Purchase rates in the automotive market have fallen under the pressure of the significant increase in car prices, which led to a freeze of the purchase process. In addition to the decline in the price of the dollar against the pound in banks, which caused the paralysis of the entire sector and raised stock levels among traders to record levels.

The recent ascent of the pound led to waiting for potential customers after the decline of car prices. The market already saw that after the companies attempted to move the market.

Ghabbour Auto recently reduced the prices of its Hyundai, Geely, and Mazda models, as well as prices of Chery cars that are being assembled in the Aboul Fotouh factories. The size of the reductions ranged between EGP 18,000 and EGP 55,000 on all models, and the sale of the locally assembled car Verna on installments was announced.

Nissan also announced a reductions in its prices, ranging between EGP 5,000 and EGP 10,000.

The table will illustrate the size of reductions offered by company models: 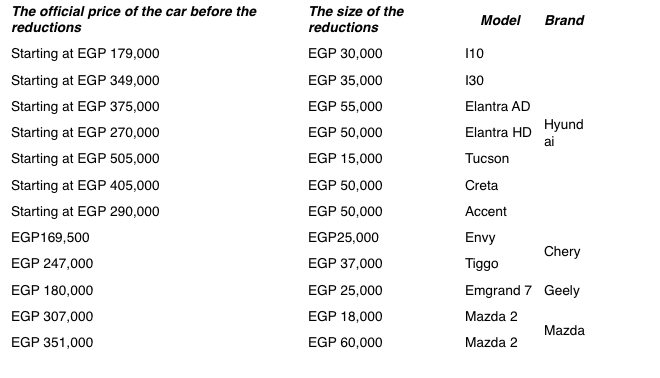